Book - Ghost in the Wires 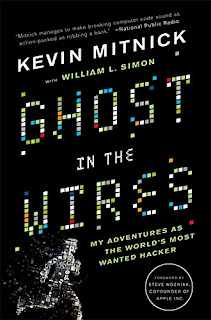 Steve Taylor-Bryant looks into the real life of Kevin Mitnick as he reads Ghost in the Wires: My Adventures as the Worlds Most Wanted Hacker...

Kevin Mitnick? Why did I know that name? Here was a man synonymous with a topic I adore reading about but yet, until I read Ghost in the Wires, I couldn't put my finger on quite why I knew the name. It turns out I knew the myth perpetrated by bad journalism in the 1990's. The myth was something along the lines that Mitnick had hacked into NORAD and could launch nuclear weapons by whistling. That's crazy, right? The only way you could take over NORAD would be from within as you can't remotely access any of their computer framework. So now the 'War Games' myth was debunked would Mitnick's real life actually be interesting? Hell yes!

There is a comparison made between Kevin Mitnick and Frank Abagnale (Catch Me if You Can) in that they both eluded capture for their crimes for many years and eventually became good people helping the industries they had hurt become better, but Mitnick's story has an edge to it I never got from Abagnale. Mitnick was indeed devious, his social engineering skills have left me wary of ever answering my phone again, and yes he took and downloaded an awful lot of source code and companies information that, in the wrong hands, could have had a devastating effect on our world but this is where I find myself in a quandary. The law states Mitnick is a criminal for his actions and, to be fair, he used people and nefarious means to access systems and information, mainly phone companies, that he had no right to be part of. He used his skills to clone mobile telephones and not pay for calls, he used false identities, often of deceased people, and he couldn't stop what he was doing, often even tapping the phones of the FBI investigators trailing him.

He never used the credit details he had of innocent people. He never sold or attempted to sell the source codes and other proprietary information he took, he almost did the entire thing for a laugh except for trying to investigate the death of his half brother. He could therefore he did and now is one of the world's leading tech security guys hacking into companies and equipment to test their vulnerability. He's doing what he's always done just with permission now, so I struggle to see his crimes as acts of spying or corporate espionage, I see them as acts that embarrassed a few people so he had to punished. At one point towards the end of his 'criminal' career he was facing over 400 years in prison, nearly half a billion dollars in compensation and was held in solitary confinement like the worst murderer or child rapist would be and for what? Pointing out that phone companies aren't as secure as they think they are?

Mitnick and his co-writer, William L. Simon whose twin brother was a law enforcement officer on Mitnick's trail for a while, have used a lot of humour in the book and certain people and companies have the fun poked at them but Mitnick comes across as a caring man who shows a lot of remorse for people he has truly hurt, although not necessarily the crimes, and come the end of the story I can't help but admire the man. The only difference between him then and him now is the word 'permission' and I hope that the companies he now helps are a lot more secure for his involvement. I may use some of these products or firms so personally I'm all up for hackers being the ones that test them for illegal access.

The technical aspects of his hacks are laid out for all to see and include code he used but it's not overbearing to an idiot like me, I found myself fascinated, and I'm sure the more tech savvy amongst you will appreciate the book even more than I did, there's code puzzles at the start of every chapter you can try and break to start with. His life and the lives he touched are a true human story and the reinvention he has gone through is as informative as you could possibly want. The myth was debunked long live the truth - it's a lot more entertaining.