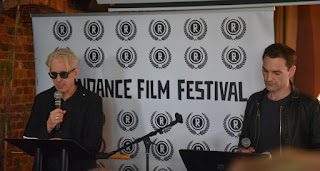 The programme for the 24th Raindance Film Festival has been announced...

Raindance Founder Elliot Grove was joined by jury member, musician Johnny McDaid (Snow Patrol) as they revealed this year’s competition films in the Feature, Short and Web Series categories, as well as the programme for the newly introduced Virtual Reality Arcade.

This year, the Festival received a record-breaking number of submissions from 98 countries, the highest it has received to date and will screen 90 feature films and 85 short films. A champion of independent filmmaking, Raindance is the largest independent film festival in Europe and has consistently been a great supporter of the UK film industry.

Along with Johnny McDaid, this year’s competition films will be judged by a panel of international artists, industry members and film journalists, including American contemporary artist, David Datuna and some of the best names in British talent, including Stephen Fry, Joanna Lumley, Imelda Staunton, Jodie Whittaker, Anna Friel, Jack Davenport and Nicholas Pinnock.

Along with Best Film, Feature Films in Official Competition will, for the first time, also compete in additional categories, including Best Director, Best Screenplay, Best Actor and Best Actress. Films include the International Premiere of Stephen Elliot’s After Adderall (USA) starring Michael C. Hall. The film is about the film adaptation of Elliot’s memoirs, which starred James Franco and Ed Harris. The Violin Player (India) is directed by Bauddhayan Mukherji and takes us on a day in the life of a failed Bollywood session violinist; and A Double Life (Japan), Yoshiyuki Kishi’s feature debut about a young woman assigned to follow a stranger, only to discover that he leads a double life.

Additional features In Competition include both narratives and documentaries vying for Best UK Film, Best Documentary and the coveted Discovery Award, which is given to Best Debut Film. Films include Mirko Pincelli’s debut, The Habit of Beauty (UK/Italy) starring Noel Clarke; Adam Irving’s Off the Rails(USA/Canada), a documentary about Darius McCallum, a man with Asperger’s syndrome, whose love of transportation has landed him in jail over 30 times for impersonating New York City public transport drivers; and the World Premiere of Five Days of Lesvos (UK), Richard Wyllie’s look at the experiences of those at the frontline of the refugee crisis in Greece and Europe’s failure to act.

The Short Film competition slate includes the UK Premiere of Szymon Kapeniak’s Moloch (Poland/Ukraine) a Cain and Abel tale about love and envy; Ondřej Hudeček’s twisted queer romance, Peacock (Czech Republic), a true story about one of the Czech Republic’s most influential writers; You are Awake (UK), directed by Pedro Martin-Calero and inspired by real events, following a group of villagers who have started to faint and fall asleep; and Oliver S. Milburn’s thriller, Dunroamin (UK).

Additional short films include Friday Night (France), by French filmmaker Alexis Michalik and executive produced by Harvey and Bob Weinstein and David C. Glasser, which is set against the backdrop of a city-wide attack in France; the European Premiere of Thomas Leisten Schneider’s Point and Shoot (USA/UK) starring Donald Sutherland (The Hunger Games, JFK); and global luxury car company Lexus will be revealing the third film in its 2016 Short Film Series.

The Women In Film and LGBT strands will include a specific selection of films as well as industry panels that emphasize the contribution women and LGBT communities are making to the industry and the current challenges they face. The LGBT strand will showcase Rhys Chapman’s Wonderkid (UK), a British short film about the inner turmoil of a gay professional footballer; Growing Up Coy (USA), the feature documentary about a Colorado family’s fight for their 6-year old transgender daughter’s right to use the girls’ bathroom at school; and Margo Pelletie’s Thirsty (USA), about the drag queen sensation, Thirsty Burlington. This year’s films directed by women include A Brilliant Genocide (Australia), Ebony Butler’s political exposé about the unrecognized atrocities against the Acholi people in northern Uganda; Fiona Rayher and Damien Gillis’ documentary, Fractured Land (Canada), which follows a young Aboriginal lawyer as he works to expose the Canadian oil industry; and Sarah Townsend’s short film, Noma: Forgiving Apartheid (UK) about Noma Dumezweni’s journey back to South Africa.

This year, the Festival has also introduced the Raindance Lab – Future of Film. This strand includes both the inaugural VR Arcade and the fourth annual Web Series and looks at alternative platforms for filmmaking and the increasing attention these platforms are gaining internationally.

The Virtual Reality Arcade, sponsored by Lexus, will feature 14 experiences, providing audience members with an immersive experience and the chance to experiment with new advances in storytelling technology. The VR programme includes powerful documentaries such as Witness 360: 7/7, a look at the 2005 London terrorist attacks; Easter Rising: Voice of a Rebel, which was produced by the BBC; 6X9: A Virtual Experience of Solitary Confinement, produced by the Guardian; and the World Premiere of RecoVR: Mosul, which was commissioned by the Economist and takes the viewer on a visit to a museum in Iraq which was destroyed by ISIS.

The VR Arcade will also showcase experiences that bring with them the running theme of empathy: Notes on Blindness: Into Darkness; In My Shoes: Dancing with Myself, about living with epilepsy, and CTRL, a look into the destructiveness of domestic violence.

The Festival’s unique Web Series will again provide filmmakers with the opportunity to tap into the online video industry. Web Series’ nominated films include Sol Rikweda’s Blood, Sweat & Chokes (UK), which follows three young fighters as they hustle to reach the Ultimate Fighting Championship; Rich Keeble Vanity Project (UK), an improvised mockumentary series about the real-life struggling comedic actor; and S-Band (UK), Hannah George’s series which follows the lives of the staff and students at Northwood High, a school for students with behavioural issues.

For the second consecutive year, Oscar® and BAFTA award nominated Mexican screenwriter Guillermo Arriaga will be conducting a Master Classfor budding screenwriters and filmmakers. Arriaga is best known for his collaborations with multi-award winning director Alejandro G. Iñárritu on Amores Perros, Babel and 21 Grams. The Master Class is in collaboration with Mexico’s Mediacine.

The Festival’s second Co-production Forum will focus on the relationship between the UK and Ibero- American film industries. A partnership between Raindance and the Guadalajara International Film Festival (FICG), the Forum will include panels, seminars, workshops and events, all with the aim of increasing investment and co-production opportunities between the two industries.

Founder Elliot Grove commented; “I am thrilled with the calibre of films submitted for this year’s Festival, enabling our programmers to select an excellent line-up. For 24 years, Raindance has continued to grow and support the independent film industry in the UK and abroad. I’m looking forward to showcasing this year’s great line-up and new strands to our audience."

Now in it’s 24th year, the Festival will take place in London’s West End from September 21st – October 2nd, 2016. For a full list of nominated Feature and Short films and Web Series see the Raindance website.

The Festival box office will be open from noon on Thursday, September 1, 2016.

Festival tickets can be purchased through the Festival website:
http://raindancefestival.org/tickets2016/