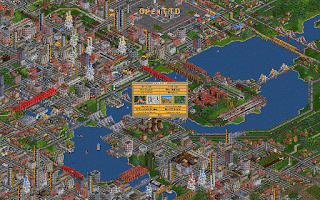 On our Defective Inspector's desk there's always a small, dust covered pile of casefiles from back in the day that he never quite got round to completing the paperwork for. Today he re-opens the file for Transport Tycoon...

When I was a kid I used to marvel at MicroProse and everything they made. Modern day people will think of this company as Sid Meier with the well-established Civilisation franchise or now Firaxis and rebooted XCOM series. But back in the 90s MicroProse was known for being the one of the kings of tycoon games, battling against Bullfrog in simulated micromanagement. In 1994 the Scottish technology god that is Chris Sawyer (known best for his Rollercoaster Tycoon work) designed, produced and launched his tycoon styled career with Transport Tycoon.

Transport Tycoon was/is a beautiful idea, you are a business owner in the 1950s and you have to establish a much needed transport infrastructure which would last throughout the ages… Well at least to 2030s. This infrastructure can be built in 4 different worlds, each one a little different and more than just a palette swap. While battling with cut throat competitors you need to “invest” in cities for favouritism, connect up a working logistics system, fight over contracts, apply new and exciting technologies to your established rail/road/boat/plane transport empire.

So why come back to this game particularly? While digging through old PC boxes I found the original box the game came in. It’s empty, dog eared and a perfect metaphor for my adult-life. While the world will remember Rollercoaster Tycoon, Railroad Tycoon or Theme Park this is the first step for Chris Sawyer in becoming a fully-fledged publisher and designer. Furthermore, this game has been running through an open source project called OpenTTD. This has allowed a dusty classic to be remade fully functioning using the beautiful GNU General Public License battling the rolling introductions of new operating systems while throwing more herbs and spices into the mix. This means most of my review will be based on this copy, for no other reason than my old copy doesn’t work on my PC anymore.

Graphically the game seems to retain its charm unless you make the disastrous choice of zooming in fully. The animation on the other hand really does show a fair few wrinkles, but the game is heavily focused on logistic systems so the graphics can take a hit and still provide an enjoyable and challenging time for any gamer. If you are lucky enough to retain the original Transport Tycoon you’ll find it has only one AI which I have affectionately named “Dumb but annoying”. OpenTTD turned it up to 11 providing a variety of different opponents ranging from the remarkably stupid to the cocaine fuelled mastermind embodying the true cooperate machine. If that isn’t enough the fine people of OpenTTD also allows for local networking and online gaming with over 250 other people, ya’know if you want absolute chaos in your life.

The core of this game is pure logistics. While some of the more modern games have more complex product/creation systems (See my Factorio review as a good example) the physics and maintenance elements involved in the micromanagement adds a magnificent difference to the genre. As time progresses you’ll get new vehicles which will break down depending on the make/model while also controlling speed based on the vehicles power, speed and momentum. Looking back, you can see elements of Rollercoaster Tycoon’s physics concepts forming as it appearing vicariously through Transport Tycoon. It forces you to consider hills, investing in tunnels or bridges which provides an interesting obstacle towards making the perfect transportation system.

Additional challenges seem to circle around the AI of both your competitors and the changes in the map as time progresses. As an example the number of oil wells appear rather bountifully in the early years but as time goes on the oil will dry up and eventually oil rigs will appear instead. There is also a supply/demand concern where factories will have fluctuating production rates and in some cases close down completely, forcing you to rejig your entire system and ruining your heavily invested rail network. The vehicles themselves do not last forever, trains will often breakdown and as time goes on it becomes more and more frequent until it is almost completely unusable. This may seem fairly simple but if you working with a tight shoe string budget and your trusty 1960s diesel train has broken down 5 times in the last transportation of goods you will be financially strong armed to replace it, even if you must endure an impromptu bit of debt. If these general challenges are not enough or sandbox is a little too wild and free for you then you there are other options. You can try out scenario modes where specific tasks need to be completed and by completing these challenges you’ll win various grades of medals and so on. The online community behind OpenTTD is strong, so if competition is also your thing it can be done head to head as opposing transport companies or simply seeing who can complete a scenario the quickest. This adds longevity to the remake which should be admired for both its client focus and ambition.

It’s hard for me say the game is not worth it when it’s free as any game which doesn’t demand money from you is worth a shot. But even before the days of OpenTTD this was a magnificent game and it’s only getting better. Consider obtaining it today and perhaps, if you like it, donate your chosen amount to the impressive cause.