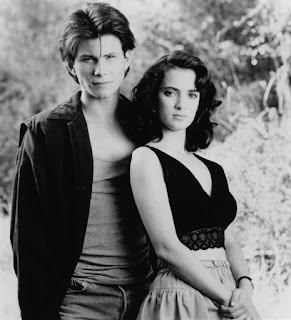 Our small band of Gunters here in the DreamCage universe are reviewing every film mentioned in Ernest Cline's Ready Player One. This week Steve Taylor-Bryant takes on Heathers...


People will look at the ashes of Westerburg and say, "Now there's a school that self-destructed, not because society didn't care, but because the school was society." Now that's deep.


There is common misconception that, when I look back at my youth, all I see is rainbows and pretty bubbles. Yes, when I write about my childhood I try my very best to write through my rose tinted spectacles. Yes, my childhood and early teenage years were a lot less stressful than my thirties and now my forties have become. No, I am not forgetful. I remember perfectly the darkness and fear I lived through, I just choose to not write about it unless I have to. I experienced death and awful loss at a very young age, I survived a terrorist attack on the military base I lived on, I survived bullying, I survived the darkest of times - school.


Which brings me nicely to today's film in our Project RPO, Heathers.

Heathers is the anti-John Hughes teenage film. This isn't about detention or puberty. This film is very dark and very psychologically affecting. Daniel Waters (Batman Returns/Hudson Hawk) wrote an exaggerated version of what school was like for a lot of us and produced a script that is basically what many of us had planned in our heads going through school - revenge. The writing was s different level to usual 1980's teen films. It had all the clichéd elements in place, popular clique, brooding loner and the like, and then set about destroying the usual way these characters play out. The dialogue was incredible in its viciousness and clever turn of phrase and the set pieces and flawed characters were some of the best to ever be put on paper ready to film. The writing alone is Oscar worthy for its brutal intent and its cutting satire but once it's written, no matter how well, it still needs a cast to commit it to screen.

Step forward three of the best for their era of the late '80s and early '90s - Christian Slater, Winona Ryder and a pre-90210 Shannen Doherty.

Winona Ryder plays Veronica Sawyer a girl who wants to so badly be popular despite not liking the popular girls, the Heathers. The three Heathers, Duke (Doherty), McNamara (Lisanne Falk), and Chandler (Kim Walker - whose immortal line in Heathers "did you eat a brain tumour for breakfast" had sad connotations in later life where the aforementioned tumour would take Walker's life aged just 32) were the quintessential clique. Everyone wanted to know them, be them, or be with them. Evil and bullying, the Heathers were every bitchy girl group at school. Considering the nice and wholesome roles the actresses were known for at the time, the against type casting was perfect. The vile and disgusting behavioural traits were accented more on screen because you weren't expecting it from these stars and this along with the genius of Waters dialogue, melded together to produce perhaps the most iconic clique in film history.

Ryder's Veronica is just trying to survive school. Like many of us she tried to attach herself to the group that would cause her the least pain in her mission of getting through but eventually the behaviour of the Heathers is too much for Veronica's soul and reputation to bear and she wants out. Her out though is where the black comedy and almost horrific satire comes in - Christian Slater as J.D. Slater always impresses. He has this ability to connect with social misfit roles and own them. Clarence in True Romance, Hard Harry Mark Hunter in Pump Up the Volume, and most recently in Mr. Robot, Slater's CV is littered with scene chewing brilliance and it all seemed to start in Heathers. As J.D. Slater channels Jack Nicholson and sets about killing people and making it look like suicide.

Without Heathers would our cultural landscape look like it does now? Probably not. Heathers single handedly launched three stars into the limelight but it did it with dark stories and shady play. The dark overtones of death play out with comedic brilliance and I'm not sure in today's world of political correctness you could make Heathers. Teen suicide is just not a laughing matter, I know from personal experience, bullying is not funny, murder is not funny, a sociopathic nut job in your school, also not funny, but the way Heathers plays out you can embrace the horrific and laugh through relief. I survived school. And I love Heathers.