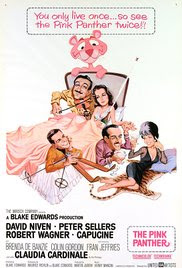 Our small band of Gunters here in the /G-f universe are reviewing every film mentioned in Ernest Cline's Ready Player One. This week Steve Taylor-Bryant takes on The Pink Panther...

I need to start with a statement. If you have only seen the sequel films, the ones with Herbert Lom, or the Steve Martin travesty then please go away.

The original film, the brilliant The Pink Panther, is not as obviously funny as the sequels. It doesn't give the entire cast license to ham it up, it is not slapstick like its following films. There are no facial ticks from a frustrated superior, there are no random attacks from a ninja butler. It is highly intelligent and deftly played out by a cast at the top of their game. In fact, only one actor is funny in the whole thing and that makes it game-changing.

This was essentially a heist movie and a good one at that. David Niven played The Phantom with a distinguished style that is hard to imagine him being played by anyone except David Niven. The world famous and yet elusive jewel thief, Sir Charles Lytton, is an aristocrat and Niven's portrayal the blueprint for all future posh Englishmen on screen. Alongside Niven's excellent performance you have royalty, Claudia Cardinale as Princess Dala, owner of the diamond with the flaw that looks like a pink panther, is as stunning as any screen goddess before and after and I dare any red blooded male to not fall heavily for her Italian charms. Oh and she can act as well! Add in the subtle yet charming early performance by an almost unrecognisable Robert Wagner as George Lytton, Sir Charles' long lost nephew, and the sheer beauty of Capucine as Simone Clouseau and you have all the ingredients to add a tinge of romance to a crime caper that blends the right amount of jokey flirting with serious dialogue. See? It's already an incredible film and I haven't even talked about Peter Sellers yet! 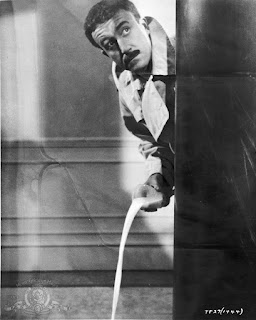 "At times like this, I wish I was but a simple peasant..."

Sellers is the only comedian in The Pink Panther. He shows signs of what Inspector Jacques Clouseau would eventually become but plays the role here in his debut like he's in a joke no one else gets. His poor English with a French accent is not yet the almost xenophobic stereotype it was to become and his physical comedy raises no reaction from any of the cast members, even when he accidentally sticks his finger up another man's nostril. This is the game-changing part of The Pink Panther. It's two films in one, totally different and yet complimentary to each other, that exist in the one space like no other film has ever achieved. The romantic heist story has a lead detective and yet the inept detective comedy has a serious romantic heist story. Sellers has proved time and again he is the king of over-exuberant comedy. He can do the loud and the voices, he can do the physical, often together really well - see Dr. Strangelove immediately if you haven't already - but rarely does the understated work so well, work so against type. Yes, future Pink Panther films are a riot (well, most of them) but I can't think of another movie that combines all of the above is such a classic, almost timeless way. The subtlety is extraordinary and I don't think you could make that work today There are plenty of actors that may get pretty close to Niven's Lytton, albeit a bit too moustache twisting for my liking, but we will never see another Peter Sellers. We will always have physical slapstick actors, and pretty much anyone can slip over on a spinning globe, but can you think of anyone that can do that, not raise a reaction from his cast members and continue on with such a professionalism and class? No me neither...