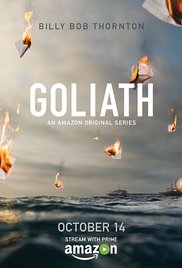 From veteran executive producer David E. Kelly ( of Ally McBeal and The Practice fame), Goliath is coming to Amazon Prime in October...

The 8 episode series, which got picked up by Amazon without having to go through the pilot process, will track one case as it unfolds as a small time lawyer, Billy McBride (Billy Bob Thornton) in Venice, California takes on the might of a corporate giant in an Aerospace company whose CEO (played by Dwight Yoakam) with serious legal talent at their disposal. There seems to be an interest now in taking crime drama more indepth and over a much longer arc, rather than "case of the week" shows previously popular, as the success of another Amazon Original series, Bosch, shows.

Kelly said of the series concept, “Law firms have become big corporate giants; cases never get to trial. What this show is about is one down and out lone-wolf warrior, knowing he doesn’t have the resources… and clinging to the notion that if he can just get there in front of 12 other people, democracy does have a chance.”

Also starring Maria Bello, Olivia Thirlby and with William Hurt as the head partner in the white-shoe law firm, Goliath arrives on Amazon Prime on October 14th. Watch the trailer below.