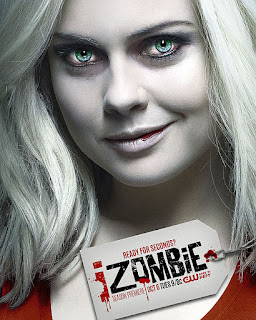 I want to begin by saying this TV series at the moment cannot be viewed in the UK on normal TV channels so instead I have been watching it on Netflix. The fact that it is not more easily available is very unfortunate as this show appears to have great potential to me (although I recently discovered that you can purchase the first two seasons on Amazon.)

iZombie is based on a young woman, Liv, who was infected when she was scratched by a zombie on a boat during a party. It is set in Seattle, which is a location typical of most zombie related films/TV series as places such as these are usually largely populated which increases the number of deaths witnessed by the audience if an apocalypse were to break out. For the moment though, it appears as if these recreations of the zombie idea are otherwise strangely different to your typical mindless zombies. Therefore the typical idea of a zombie outbreak is also different in this series, as the zombies tend to be more subtle, no matter how gruesome the individual zombies’ intentions are.

Although in one zombie book that I have read, there was a teenager who had regained her conscience after being infected, due to a vaccine she was injected with to prevent her becoming an average mindless zombie, this idea differs to the one shown in iZombie. In that book there were still mindless zombies, with a few regaining conscience, whilst in iZombie, while the zombies can go ‘full on zombie mode,’ as the main zombie character Liv describes it, which is when zombies are so angry or hungry that they cannot control themselves, the rest of the time they can still physically control themselves as long as they are not angered or cannot provide their primary food source (brains, obviously!)

The show’s genre is a combination of crime, drama and horror which provides a wide range of potential viewers, always beneficial to both the company producing the show and its audiences. The horror aspect of the series continues to have me intrigued. However, personally, I'm not a big fan of the crime genre as it does, at some points, get difficult to follow the story but, whilst the main character Liv is using her ‘gift’ to assist in finding criminals, there are much darker things going on in Seattle. There are quite a few zombies throughout the first season who are giving the other zombies a bad name (as if they had a good name in the first place.)

The most well known actors from the show include Malcolm Goodwin (plays Detective Clive Babineaux) who is famous for other drama/crime series include House of Cards and Elementary. Another is David Anders (plays the genocidal zombie, Blaine) who was well known for his character in Heroes as Adam Monroe who later appears to be the villain of Heroes’ second season. This proves that he is a good choice for the role of “Blaine” in iZombie as he has experience in playing ‘the bad guy’.

As the show moved closer towards the end of its first season, a lot of action started to take place which left me intrigued in the story as it appeared to not offer much closure (although I won't mention why due to spoilers) and it also left me wanting to start watching the second season which fortunately appears to start not too long after the previous season as, if it didn't, it may lead to unanswered questions.

I have tried to include as few spoilers as possible here as I generally believe that this intense series deserves recognition and I strongly recommend that people watch it.