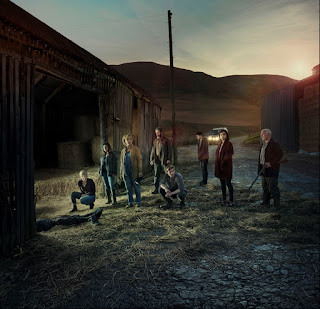 A new 4 part drama from the creators of The Missing, One of Us is coming to BBC later this month. Here's an interview with the writers Harry and Jack Williams...

Adam Elliot and Grace Douglas are childhood sweethearts, just back from their honeymoon when they are brutally murdered. Their families, neighbours in the remote Scottish Highland village of Braeston, are devastated. But their world is turned upside down when the murderer arrives on their doorstep the night after the killing. A storm has been raging, and his car comes off the road. When the two families find him, badly injured, they are faced with a terrible dilemma…

In the search for answers, skeletons are unearthed and old wounds reopened. Everyone has secrets, but when the lines between right and wrong, good and bad, true and false, become blurred, how do you cope with the lasting and deadly consequences?

With the series due to start on Tuesday 23rd August, the BBC have released an interview with the creators and writers, Harry and Jack Williams:

Describe One of Us in a nutshell?

Jack: One of Us is a show about two families who live side by side in the middle of Scotland. Their youngest children get married and are brutally killed shortly after their honeymoon. The show is about the fall out of that. It’s about tragedy and loss and justice and morality.

Harry: Their idea of right and wrong is challenged when the person who killed their kids turns up at their house in the middle of the night during a storm.

Jack: It asks the viewer, ‘what would you do?’ What if the person who did the most terrible thing to you, turned up on your doorstep?

Where did the idea come from?

Harry: The idea was always about people taking the law into their own hands.

Jack: It started with the idea of murder done the other way round and it grew from there. After speaking to Chris Aird (Executive Producer) about it we realised Scotland was the right place for it, it’s remote and wild and there’s a lot of pathetic fallacy going on with the landscape and the weather, which reflects how the tragedies unfold.

What are the core themes?

Jack: Morality is a central theme. Also the two families’ lives are very intertwined and there’s a web of secrets there that this terrible incident is going to unpack.

Harry: It’s the big themes of right and wrong, morality and justice. There’s also smaller ones, like Sal for example, when she found out that Alistair was cheating on her she always thought she would leave him but when it came to it she just didn’t do it. It’s what is right and wrong for herself. Every character has their own version of that theme which is explored in the series.

Jack: it’s also what tragedy does to human relationships, which is also something we tried to explore in The Missing. We’re looking at these big dark themes, that crime dramas do tend to look at, but instead asking what is it like being in the middle of that, an ordinary family who struggle to get through it.

Harry: We wanted to avoid the familiar tropes, so doing it all from the victims’ point of view felt like a more interesting way to go. 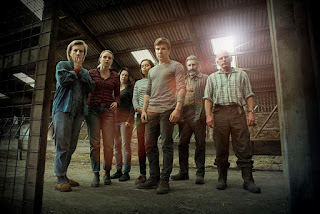 Tell us about morality throughout the drama…

Jack: The question of ‘what would you do?’ is in every aspect of the story, from the murders to the secrets that come out about these families. There’s about five or six stories that will hopefully make people question what they would have done differently, and challenge the perception of what right and wrong is.

Harry: It’s putting the audience in the heads of these characters, trying to get them to empathise with them and ask if they’d do the same. If you can get people to do that then you’ve done your job. And the law is different in different countries, some have the death penalty and some don’t, which is an interesting avenue for drama. We started with the idea of trying to do a morality tale and then everything else came from that.

Why is it important that drama is challenging?

Jack: We always assume the audience is more intelligent than us, which is normally true, it’s not hard to be to be honest! So rather than second guessing ourselves about how clear things are we want to make it as complicated and rich as we can, and trust that people will keep up. Because if we can I’m sure everyone else can!

How important is the landscape?

Harry: When we set it in the Scottish Highlands we always thought it was going to be grey and overcast but it was a really good summer in Scotland, so a lot of it is quite sunny! Which is nice as its incongruent with the themes, which lends it another element.

Jack: The Highlands dwarf everything. We shot some amazing stuff up there with helicopters. The remoteness is hugely important in Scotland and the story couldn’t take place anywhere else. A lot of the story depends on people not being around to watch you, to guide you and to judge your decisions. It’s like the “if a tree falls in the forest…” idea.

Are there any similarities to The Missing?

Harry: We were filming The Missing as we were writing this. It was nice to do something that was short form and linear, not jumping back and forwards, so it felt like the next story we wanted to tell.

Jack: The Missing piqued our interest in writing stories that were more character based, taking crime elements but having a very personal way into them. That allowed us to do this, as One of Us is a fairly dark story.

Harry: Tony’s story in The Missing where he takes the law into his own hands and ends up killing Ian Garret on his boat was one of the most enjoyable for us to write in The Missing, and this is an extention of that to a certain extent.

Why do you think it will appeal to audiences?

Harry: We hope that the viewers will come away from it asking what they themselves would do. Empathising with characters, or hating certain characters, or disagreeing about how they feel about the story. The end goal is that it will start a conversation.

Jack: You want to engage and challenge people and leave them not knowing how they feel.