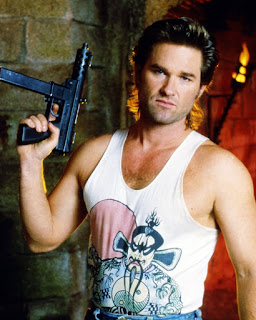 Our small band of Gunters here in The DreamCage universe are reviewing every film mentioned in Ernest Cline's Ready Player One. This week Nate McKenzie heads for Big Trouble in Little China...

Kurt Russell and John Carpenter are synonymous with 1980s cult film. Although they first worked together on a TV biographical movie about the life of Elvis Presley, they are remembered best for Escape From New York, its sequel Escape From L.A., The Thing and, of course, Big Trouble in Little China. The last of those being the only one that I can't remember having watched as a youth. Thankfully, #ProjectRPO affords me a reason to watch movies I might otherwise continue to neglect.

Russell is Jack Burton, a caricature of every John Wayne role without the hero gene that Wayne's roles possessed. Burton falls down as much as he rises up but he somehow seems to keep moving towards the goal - saving a woman, Gracie Law (Kim Cattrall) from the evil underworld kingpin David Lo Pan and his trio of magical body guards, called the 3 Storms. Burton requires a significant amount of help from his gambling buddy, Wang Chi (Dennis Dun).

On IMDB.com Big Trouble in Little China is synopsized as such: "An All-American trucker gets dragged into a centuries-old mystical battle in Chinatown."

That one-liner alone makes Big Trouble in Little China a great candidate for an episode of Was This Always Weird. Why exactly is this ancient Chinese battle being fought on American soil? The bad guys are looking for a Chinese girl with green eyes, which would be a rare find in itself, so they come to America where there are fewer Chinese people than, say, oh I dunno, China? Questions abound but none are answered. And that's just fine because Kurt Russell can do no wrong by me.

It was interesting to see such engaging displays of talent (Russell, Cattrall, Victor Wong) surrounded by middling actors. It was like seeing Ian McKellen do a Shakespeare play but with high schoolers. Actually, that's unfair - Russell is no McKellen; it was more like Johnny Depp doing that. 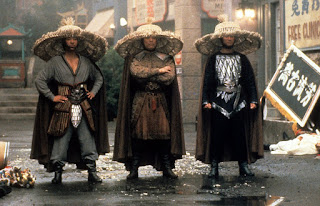 Big Trouble intertwined a fascination with Far East mysticism and an American brand of sarcastic cynicism. Also released in 1986, The Golden Child, starring Eddie Murphy, followed a similar storyline. So, why does Rotten Tomatoes give Big Trouble an 82% on the Tomatometer while The Golden Child sits at a lowly 26%? Confusing matters (and myself) even further, both movies had a budget of $25,000,000 (about $60M in 2016). But where Big Trouble made $11.1M (less than half of its budget) The Golden Child more than tripled its budget, raking in almost $80M at the (U.S.) box office. Neither movie is especially pretty to look or terrifically acted. In fact, they are so similar that both feature the actors Wong, James Hong, and Peter Kwong in significant roles.

So why is Big Trouble remembered so fondly while The Golden Child is left gathering dust on the shelf?

Simple: One has horror master John Carpenter and favorite among cult kids Kurt Russell while the other has Eddie Murphy.

Don't get me wrong - I love Eddie Murphy. He is a legend, an icon. But Eddie was a comedian by nature, and already huge by 1986 while Kurt Russell was subtly on the rise as an action-film star. You could honestly say that Kurt Russell has never attained the level of fame that Murphy did, which makes Russell and his various low-budget, cult classic roles a lightning rod for the adulation of the 1980s nerd army that now runs the world (and writes movie reviews).

Big Trouble doesn't know if it is a comedy, action film, spoof or rom-com but somehow manages to be all of those things; its insecurity in failing to commit to a genre is one reason the movie has such a solid fanbase, I think, because so many 80s kids (all kids actually) can empathize with feelings of displacement and trying to fit in somewhere, without being just a cog in the machine.

Big Trouble in Little China is fun and dopey, funny and dumb all at the same time. My favorite thing about the film is that, while viewing, I had the thought that it could be retitled Mortal Kombat: Genesis - then I found out that the characters Raiden and Shang Tsung, from the original video game, were in fact inspired by the film's characters Lo Pan and Lightning. Neat.

As entertaining as Big Trouble is, though, it really makes you appreciate the overall greatness of Indiana Jones and the Temple of Doom.