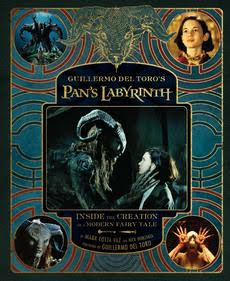 Out today from Titan Books, our own teller of tales, Romeo Kennedy, reads Guillermo del Toro's Pan's Labyrinth: Inside the Creation of a Modern Fairytale...


To commemorate the tenth anniversary of Pan’s Labyrinth, Titan books have released a beautiful tome that is perfect for fans of this wonderful film. Inside this beautifully bound book are 160 pages of wonder that really capture the essence of the film and the magic that it took to make such a cinematic delight.

With a foreword from director and master creator, Guillermo del Toro, whose imagination runs free and fantastic. Sit yourself down with a nice cup of mandrake root and milk, or tea if you prefer, and immerse yourself in this creation of a modern fairy tale.

The book is packed full with excerpts, interviews, of both cast and crew, including long time del Toro collaborators, Bertha Navarro and her brother Guillermo. It tells of the many highs and lows of making a film such as Pan’s Labyrinth, with a 19 million dollar budget and the constraints that surrounded that, and how the director and his team sought to defy creative obstacles that were placed in the path on which they were bound.

The director speaks of how this film is one of his most treasured along with The Devils Backbone, and the book talks about the journey that started with Del Toro’s first feature (Cronos 1993), eventually leading to Pan being made and the journey onward from there (Crimson Peak 2015.)

Unlike the lair of the Pale Man, you may eat all the contents in this book as it is a visual feast as well as a very in depth recounting of the film’s concept to creation. There is some beautiful concept art from things such as the Captain Vidal’s mill, the labyrinth and creature concepts. covering everything from early designs to finished creations.   The early designs for the Pale Man and the faun Pan are really interesting especially as it shows how those designs evolved into what is seen on the film and is very, very different.

There also features some absolutely stunning sketch inserts and pages from the director’s fabled red pen notebooks which are a real treat. Once again, with this addition to the book, it further displays the wizardry of Del Toro’s imagination.  Whenever discussing Del Toro, I always mention his iconic and unique style. Even in Del Toro’s Hollywood films such as Blade 2 or Mimic, he has this style that carries its own color palette. To me, it almost walks the lines that are between light and dark but the same time are revolving and interchangeable.

The character of Pan is one of Del Toro’s most iconic characters for certain but, as I’am reading this book, there is an insert that is again from the director's notebooks and it depicts the tree that, in the film, the large frog is sucking the life out of. Just look at the tree (which is also the image on the cover of the DvD and promotional posters.) 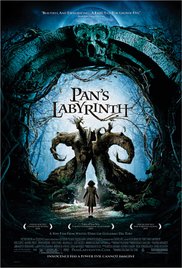 This tree is Pan, Pan also looks very treelike and those creaky joint movements he makes resemble that of a tree creaking in a storm.

Del Toro wastes nothing. From the viewers' perspective Pan is seen (I think) at least three times for Ofelia’s tasks but that tree says to me that Pan is everywhere. He exists in both the backdrop of a horrific reality that is the Spanish Civil War but also in the fantasy world that is seen and yet unseen.

There is such a lot to be taken from a film like Pan and this beautiful book is evidence of that. Having seen the film a fair few times (one that I could watch again, and again) there were many things that I learnt about its creation that I did not know before.

Rediscover Ofelia’s journey anew and venture into the labyrinth once more.