Book - #Save the Culture: No Country for Old Men 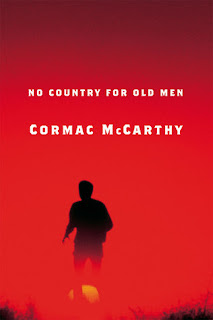 In our effort to #SaveTheCulture here at The DreamCage and keep what we consider to be important books in the public conscience, David Ames nominated Nate McKenzie to read No Country for Old Men...


Cormac McCarthy's No Country for Old Men was issued to me by David Ames as part of our #SaveTheCulture campaign here at The DreamCage. As far as required reading goes, reading a book by one of my favuorite authors was sure to be a cake-walk. McCarthy's The Road is the book I hold in highest regard, so I assumed A) I would enjoy No Country as well and B) I would be able to easily surmise, and relate, its importance as a vital piece of our culture.

One of those things proved to be true.

Set in 1980, No Country follows the intertwining stories of good ol' boy Llewelyn Moss, small-town Sheriff Ed Tom Bell, and psychopathic murderer Anton Chigurh. Moss, while out hunting one morning, happens upon a drug deal that went off with "a glitch or two". All parties present are dead. Moss finds a briefcase full of money in the possession of one of the recently deceased and, despite knowing how dumb of an idea it is, takes the money home. Sheriff Bell and his deputy are alerted to the failed fracas and there begins Bell's investigation. Chigurh is hired as a hitman by the parties that choreographed the deal to recover the money.

This is the point where things cease to be painted in black and white.

"Anything can be an instrument."

While you root for Llewelyn, he is no protagonist. He's simply a guy who finds out how unfortunate good fortune can be.

Anton Chigurh, although an emotionless killer, is not the bad guy. At least not in the sense that we are used to. A rampaging murderer, Chigurh is the angst of No Country, pure evil, but with a moral compass; even if that compass does point a direction that no other person can, or is willing to, travel.

Sheriff Bell is no hero either. He operates as the antithesis to Chigurh, but not quite an ally to Moss. Rather, he's the conscience.

Underneath the layers of the events in the story hides the true identity of the characters: Chigurh, Bell, and Moss represent the id, super-ego, and ego. Chigurh, the instinctual killer; Bell, the lawman, a problem solver by trade; and Moss, the practical everyman, doing whatever is necessary to battle against his adversary and survive. Each is a part of the one. It's like if you take a coin out of your pocket and look at the face, then flip it over and see the backside of it, then flip it over again and there is a third side. No Country employs no main character because life doesn't have main characters. The world isn't two-sided, it's a spinning coin. Our perception of our world is that we are the focal point, the lead role, surrounded by supporting cast. But that perception is a product of our arrogance. In reality, each of us is a bit player in a huge production that has no shortage of cast. The narrative is irrelevant because the play never ends. What is important is that which you learn in the moments you are watching from backstage. McCarthy conveys a contradictory dichotomy - God-fearing and nihilistic at the same time.

"There's no such thing as life without bloodshed."

Just as the American Southwest is a stark, unforgiving landscape, so too is Cormac McCarthy's writing in No Country For Old Men. Much has been said about George R.R. Martin's willingness to have any character murdered in the Song of Fire and Ice series. When it happens in those books it happens to further a plot point. There is a reason for it. McCarthy is far more malicious with his characters than Martin. When he kills someone off there is rarely vindication or an explanation forthcoming. They died because they were killed and are now dead. Reason? No need. Like William Munney says in Unforgiven, "Deserves got nothin' to do with it."

As the psychopath with a philosopher's bent, Anton Chigurh embodies McCarthy's views on the nature of murder, i.e., if it isn't necessary, it is at the very least acceptable as a mechanism of the world around us. That is a world we seldom are an integral part of. That is what is so astounding about No Country For Old Men: the entire world that McCarthy creates on the pages envelopes you. You become a ghost, standing mere feet from the action, observing, without interrupting while all manner of hell is opened up before you. You feel the desolation, the grittiness of living in the barren southwest, of running from the law and evil alike. Tonally, No Country is essentially the novelisation of a Johnny Cash album.

The power in Cormac McCarthy's storytelling lies not just in his ability to weave a great tale but in his masterful command of the English language; specifically, his ability to manipulate words and phrases and place them in an order that has previously been unseen. There is an almost provincially Shakespearean vitality to the language used in No Country. He uses 'could of' instead of the proper 'could have' for a simple reason: that is the way the character would speak. To McCarthy, they aren't characters, they are people who exist in a world that you have never been to, will never visit. Therefore, the story is one passed down by word of mouth through generations more so than it is a product of fictional invention. Every single page of No Country has at least one sentence that should be chiselled into stone somewhere.

"Even a nonbeliever might find it useful to model himself after God."

The title No Country For Old Men comes from the first line of the poem Sailing to Byzantium, by W.B. Yeats. The poem is about a man growing older and moving on and trying to make sense of the days of his past.

Cormac McCarthy plants this theme subtly in the context and dialogue of his novel amid the excitement of murder, money, and a fight for survival. In the way that an old man looks back on his life, wondering where the time went, reminiscing and trying to glean some meaning from it, the reader devours No Country without stopping to let it digest. Only at the end is it apparent that No Country is a warning against ignoring the inevitable mortality of us all.

Via the sermonizing of Chigurh: "A person's path through the world seldom changes and even more seldom will it change abruptly. And the shape of your path was visible from the beginning."

...the ruminations of the old-timer, Bell: "All the time you spend tryin' to get back what's been took from you there's more goin' out the door. After a while you just try and get a tourniquet on it."

...and poignant statements that, if taken to heart, can genuinely affect the readers view of things: "You never know what worse luck your bad luck has saved you from."

No Country for Old Men is an indispensable piece of our culture. It doesn't kindly give you a pat on the back in the end and tell you everything will be alright; it tells you to make of your life what you can but be realistic and honest with yourself.

As Sheriff Bell opines, "It's a life's work to see yourself for what you really are and even then you might be wrong."

For the next installment of #SaveTheCulture, I nominate Romeo Kennedy to read Haunted by Chuck Palahniuk, a book that caused actual physical reactions by listeners in response to readings by the author at book signings. Godspeed, sir.