Film - The Death of Don Quixote? 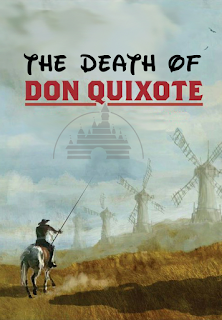 As news of a Disney-funded version of the Holy Grail of films reaches our ears, Steve Taylor-Bryant and Reece Morris-Jones weigh in with their thoughts...

Steve: I was on my time off, I don't get much and, like millions of you I chose to peruse Facebook. This is never as calming as I intend it to be; there's always something that winds me up and agitates me deep into my concrete soul. Normally it's discovering that someone you vaguely remember from 35 years ago has grown up to be a fascist, or some image of a cat posed in ridiculous headwear. However, this time it was the link to an article shared by our own Reece Morris-Jones.

I read the headline. It was like a red rag to my bullish feelings:

Anyone who knows me is more than of aware the high regard I hold Mr. Gilliam in. Not familiar with my fanboy love? Get caught up here. Once you are, my comment that Disney can fucking do one will not surprise. I've wanted Gilliam's Quixote project for nearly as long as he has. But then I calmed down and thought about a few things.

Disney make good films. I'm not a fan of the Marvel stuff, but the excitement people have for something as dull as Thor 2 shows they know what they're doing. Star Wars appears to be in safe hands and let's face it, every single one of us has an animated favourite! So, if Disney did do a lavish and expensive Quixote film it would probably do okay. It wouldn't be Gilliam good, but I expect it would find an audience. However, if you want Quixote done properly why didn't you hand him some money to do it under your own banner? Because Disney don't do indie. But what if they did?

All major studios have this umbrella system and to be honest it doesn't offend my sensibilities as much as it does some of you. Twentieth Century Fox have Searchlight etc and directors can sell their soul for a flagship blockbuster, but also get a guarantee that their humble book adaptation or film college short can be made for a half-decent budget.

The advent of a digital world has changed the landscape of film forever. Amazon and Netflix have entered the fray and are making waves by producing excellent products - without the overhead of owning a studio lot or a sound stage. Which brings me to another headline I read recently and a way for Disney to enter the more independent market...

This actually makes sense to me. Yes it would be a billion-dollar deal and that's a lot of money, but! They would get a finished product that has an audience and wouldn't have to invest in the streaming market themselves. We’re starting to see everyone under the sun trying to make their own version of Netflix, but as the past decade has shown, the world of tech allows for only one winner. Netflix lets Disney be that winner.

Disney could invest in the likes of Gilliam and Jones and show an already garnered global audience the power of great film-making. They could force their own television crap on that same audience that have kids, I know my kids want to watch the Disney Channel but I can't afford it. However, if it's on a platform I already fund? They could then push their blockbusters onto the new, younger, tech-savvy audience that doesn't purchase DVDs - in fact, if Disney owned Netflix they'd own the world!

The Netflix original with Disney backing? I've gotta say, that excites me.

Reece: Unlike Steve, the idea of one company owning almost the entire media landscape scares the crap out of me. Quite frankly, I’m not sure anyone can make a decent adaptation of the material, with details of Gilliam’s version seeming to take an almost metatextual look at the story (and his own history with it) rather than directly adapting it.

Still, if Disney is eying it up, it's no doubt thinking of it in terms of a Pirates of The Caribbean style adventure. Disney do not do subtle these days (unless you count how they dodge their taxes*). Which is what gets me groaning. The Pirates series started off fun and light, but with the law of diminishing returns being applied to every sequel, they quickly ran the franchise into the ground.

Looking at what they tried to do after that with John Carter and The Lone Ranger, I’m sure any sort of adaptation of Don Quixote would come with fuck-off big CGI sequences and some sort of gurning twat played by Johnny Depp. Just to deliver another kick in the knackers to Gilliam, who at one time cast him in his version.

And why do that? As both adaptations mentioned before show, there isn't an audience for those sort of pulp films any more. It seems that at the moment, the desire for genre fare that plays to the cheap seats is fulfilled by superhero films. Not a $250 million adaption of a book that has a cult following at best. All of whom will probably not watch it out of respect to Gilliam.

I’m not even the biggest fan of all of the man's work. However, the idea of him no longer being able to finance the film he's wanted to make (for close to the length of my entire life) because Disney muscled in and took all the money, makes me feel sad.

Now if Disney wants to give him the helm on a project that lets you watch money burn on screen for two hours, I would be overjoyed. But businessmen don’t like those they can't control and Gilliam’s famous calling-out of them back in the 80’s hasn't been forgotten (hence how hard he has to work to finance his projects).

My hope, like Steve, is that Netflix will one day give him the money. What's $20 million when they spent an estimated $5 million on each episode of Marco Polo? Never seen Marco Polo, you say? Well neither has anyone else.

So, net themselves some critical cred and spend a small amount of money to make an old man happy? Go on, Netflix. You know you want to. Hell, I’d even take Amazon at this point!

*Our lawyer, who ran screaming from the building when they read this sentence and thought about Disney’s legal team, managed to mutter something about all this being just hearsay and merely the opinion of the writer. Garbage-file would really not like to be sued by a company that can fuck you up like Disney can.
Email ThisBlogThis!Share to TwitterShare to Facebook