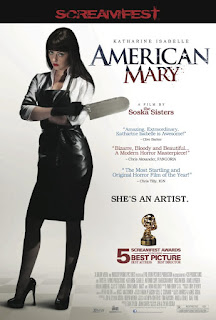 
If anything has ever made me want to sing “O Canada,” it is Katherine Isabelle. Not only is she gorgeous but she has also appeared in a lot of films that I truly enjoy: Ginger Snaps, Freddy vs. Jason, 30 Days of Night: Dark Days. Her appearance, specifically in the horror genre, make me want to watch every movie of hers that I can.

Today I watched Jen and Sylvia Soska’s 2012 cult hit American Mary. It follows a young woman named Mary, played by Katherine Isabelle, who is a surgical student hard up for money. She goes to a strip club in hopes of making some cash but stumbles instead into the world of underground, backroom body modification. The club’s owner makes use of her skills by employing her to perform surgeries for those who voluntarily want to alter their bodies.

If you haven’t quite figured it out yet, this film is body horror and while I wouldn’t say it is perfect, it is a great entry to that genre. The gore is there and it is ever present in the movie. We get to watch Mary perform multiple surgeries and we are treated to countless gallons of blood and viscera. It isn’t ridiculous or over-the-top but instead strangely realistic considering the content of the film.

The only wholly unbelievable aspect of the film is the terrible attitudes of all the actual doctors who are helping to train Mary. One leaves terrible voicemails and calls angrily berating her with vulgar language while another callously asks her to report to a family that their patriarch has died of a heart attack. The doctors are painted in an even worse light when they eventually drug and rape a woman.

I don’t want to spoil some of the weirder aspects of this film because that is where the heart of it lies. The movie is so incredibly strange and interesting. I have to say that as taken aback as I was by the content, I was also enthralled. At one point, a woman actually asks to have her breasts removed and her vagina sealed as much as possible so that she can become a living doll. That alone should peak your interest.

The film is not for the faint of heart but anyone who enjoys body horror or simply likes the weird side of things would enjoy this film. It gives a different side to body horror—one not of torture but of self-realization. Isabelle is fantastic as always and the supporting cast perform their roles perfectly as well. For a low-budget movie, this doesn’t appear to be cheapened at all. The filming is great and there is wonderful use of beautiful music as a juxtaposition to the surgical scenes.

This is definitely worth a watch if for no other reason than the sheer weirdness factor which exists herein. Sit down, but without food, and watch something truly original and different.