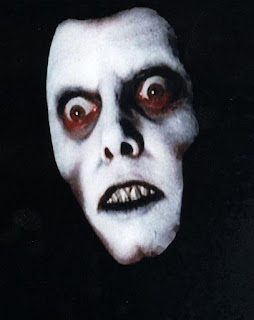 Welcome to our Hallow-vent Calendar; a horror-film-filled daily countdown to our favourite spooky celebration, Hallowe'en. For Day 29, "The Scariest Movie Of All Time Has Returned" as David Ames watches The Exorcist...

After two straight days of terrible movies, I felt that I needed to reclaim some dignity and so I sat down to watch my favourite horror movie of all time. This film is widely considered to be one of, if not the, best horror movie of all time, causing people to pass out and flee the theater on its first release. There have been multiple editions released, papers written, documentaries filmed, and rumors abounding about the history behind what many consider to be the scariest film ever made. Today, I get to talk about William Friedkin’s 1973 classic The Exorcist.

I first saw this film when I was twelve. It was 1996 I hadn’t really discovered my great love of horror movies, although by this time I had stumbled across the classic slasher franchises of Nightmare on Elm Street, Friday the 13th, and Halloween. Movies had never really freaked me out or scared me and even though jump scares would still catch me off guard, no movies had ever really stuck with me (Except It because I HATE clowns). That would all change one night. I was staying with my father and my step mom and late into the evening The Exorcist came on one of the movie channels. What happened from that moment was my first real love of horror movies, especially psychological works like The Exorcist, The Shining, and others of this ilk. As the film unfolded, I knew that I was watching something different.

If you aren’t aware of this film, shame on you. After years and years of watching movies, especially horror, this film still resonates as not only one of the very best horror movies, but also just one of my favorite films in general. The Exorcist follows actress Chris MacNeil as she works on a new movie in Georgetown. Her young daughter Reagan is with her and as the film progresses, strange things begin to happen in their house. Eventually Reagan becomes possessed and priests must be brought in. I don’t want to give too much away just in case you haven’t had the chance to watch this masterpiece yet. What I will say is that to this day there are scenes in this film that still unnerve me.

Acting-wise the movie is full of amazing, award-winning performers. Chris MacNeil is portrayed by Ellen Burstyn with such fierce devotion that you can feel every ounce of worry and pain she experiences. We feel the desolation and complete helplessness she feels as her daughter is tortured in front of her eyes. Max von Sydow plays the aging priest, Father Merrin, with gusto and resolve. He is unafraid and calm and approaches the scene with a sense of propriety and purpose that truly gives his performance clout. He is the famous silhouette that we see in a lot of the promotional artwork, standing in the streetlight in front of the house. Jason Miller, playing Father Damien Karras, is great at portraying a man completely struggling with his faith, at a loss for what to do or what to believe in. His struggles with faith and with his mother’s death are palpable and they add yet another layer to this dense story.

Lastly, and I feel that she deserves her own paragraph, is the fourteen-year-old Linda Blair, who plays Reagan MacNeil. She was so incredible that she actually received an Oscar Nomination and won a Golden Globe. How she lost the Oscar is mindboggling to me. She is incredible and my only guess is that The Exorcist wasn’t the type of movie that the Academy wanted to reward (see my article over Respect for the Horror Genre). Blair is intense and scary, weak and vulnerable, strong but scared. She is everything she needs to be and her performance still holds up today. The scene in which she looks calmly up into the face of an astronaut and says, “You’re going to die up there,” was enough to know that Blair would be amazing in the rest of the film. She deserves all of the credit and all of the awards—all of the awards ever.

The movie itself is shot beautifully and Friedkin sacrificed actor and actress, money and time, and anything else he could to ensure that his film would turn out as it did. He may have severely hurt Burstyn’s back or cut into Blair’s skin but he didn’t care as long as the take was what worked. In the end, although he gained a reputation for not caring about his performers, he put together a film that has endured for over forty years now. The music is another incredible aspect of the film and Friedkin utilizes Mike Oldfield’s amazing score in ways that will be imitated forever (see: Insidious, The Witch, Halloween). The music is just another facet to the brilliance that is The Exorcist.

The script was an adapted screenplay by William Peter Blatty, the author of the novel on which the film is based. Blatty’s novel is based on a supposed true account of a young boy named Robbie Manheim (also known as Roland Doe). The book is incredible and became a best seller but, even though it was very successful, it can’t hold a candle to the film.

There is one scene in the film that needs to be seen. It was erased from the original cut of the film and only shows up in certain cuts but, for my money, it is easily the most disturbing aspect of the entire film. It works because Friedkin tracked down a contortionist to perform an upside-down spiderwalk down a flight of steps and throw up a ton of blood. It is short and was later replaced in the movie but it is such a striking image that any fan of the film should have a chance to see this:

If you can’t tell, this movie holds a special place in my heart. It through open the doors to horror and made the genre seem like more than just scares. This film is responsible for my enduring love of not just horror movies but in the entire medium of film. It is so well executed, so well performed, and so genuinely creepy that to this day, nothing can hold a candle to it. If you haven’t seen The Exorcist, you are missing out. It is a classic and something that, regardless of snobbish critics, deserves as much if not more respect than The Shining. The Exorcist is a film that will at once arrest and terrify you and leave you with questions—it’s a thinking man’s movie and you should all sit, watch, and ruminate on the questions therein.