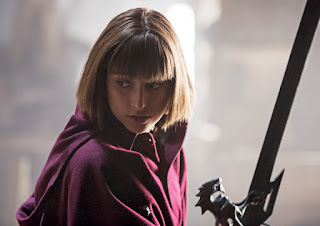 The Last Dragonslayer is coming to Sky 1 on Christmas Day and Sky have released an interview with Jasper Fforde, author of the book ...

It’s a fairly typical day in Hereford, all in all. Property prices are rising, the same old celebrity talent shows are on the TV, and the wizards you got in to rewire the house made a right mess of things. Under the rule of His Royal Wondrousness King Snodd, magic is on the way out; we’re on our way to there being a car in every garage and a Wonderbarn on every high street. The orphan-based economy is booming, and overseas, the Great Troll War rolls on. Meanwhile, over the forbidden Dragonlands, Maltcaisson, the last of the great dragons, awaits his final battle. It’s in this world that Jennifer Strange, an orphan indentured to the great wizard Zambini, finds herself thrust into an adventure fizzing with magic, mystery and quarkbeasts. She may not know it yet, but Jennifer Strange is The Last Dragonslayer.

When asked about the book, Fforde said "The Last Dragonslayer popped into my head almost fully formed after a gruelling six-month shoot in Mexico back in 1997. The initial draft took 22 days to complete, and was thematically much as we see it today – a fresh take on the wizard and dragon genre, an off-kilter mash-up world of modernism and medieval barbarism, torpid dragons, useless wizards and rubbish kings – and all seen through the eyes of our heroine, Jennifer Strange.

"Orphaned, indentured, seemingly with little prospects, she is thrust reluctantly into the controversial dragonslaying business, where she must do the right thing, even if the power of the king and big industry is heaped against her. But she’s resourceful, principled, smart and funny, and has fellow orphan Tiger Prawns to assist her, along with her ever-loyal quarkbeast.

"Since any film would always be an interpretation of my book, I had to ensure that the people I entrusted with the production fully understood the spirit of the piece – absurdist fun, but with serious undertones – and I was delighted that producer Pete Czernin and I clicked almost immediately. He took it to Sky and Jamie Stone, and sim-sala-bim: in colour, with sound, for real. It will be like falling into my own head. 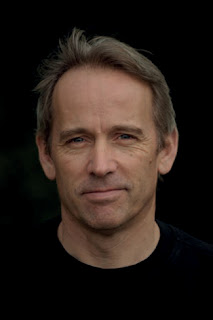 This will be the first time one of your novels will have been adapted for the screen. Are you looking forward to seeing your work come to life? Are there any nerves?

I spent the first 20 years of my career in the film industry, so I have an interesting perspective on the whole adaptation theme. It stops you being precious about losing things you think are important. I’m very excited to see how the book is adapted into a film. I’m not looking at what is similar, but I’m looking to see what they’ve found exciting and used. For me it’s very exciting, not to see whether it’s faithful to the novel, but just how exactly they’ve run with it.

Did you have any involvement in the production in an advisory capacity?

Not really, and I think that’s quite important. If they needed me, I was there, ready and waiting, but if they didn’t want me to be involved then I was totally happy for that as well. I was quite happy to have a hands-off role. Because each book is very personal to the reader, reading is a very imaginative process, as you create the pictures in your head – which is why people often say how films based on books are nothing like how they imagined. But you should take it as an interpretation of the book. Trust in the producer and director and screenwriter as everyone wants to do a good job.

You visited the set during filming. How close did the finished product meet the picture you had in your head while writing?

It was great. I met with Ellise and she had this brilliant, orphan-chic outfit on, and she looked absolutely spot-on.

The Last Dragonslayer series were your first books written for a young adult audience – what made you want to explore that territory?

The Last Dragonslayer was written in 1996 and my first novel wasn’t published until 2001, then The Last Dragonslayer wasn’t actually published until 2010, so there were a good few years from conception to publishing. At the time I had 12 years trying to write and wrote six books. I’d written absurdist books and a Gothic horror: none of them were selling. It was just rejections straight down the line, as is normal when you’re trying to be an author. My sister got me on to writing children’s books and I wrote my first draft in six weeks. The books are very much for kids who are slightly sophisticated and know that you’re subverting a genre – with themes of orphan economies and human greed to go along with the magic and dragons that are typical of fantasy novels. It was rejected at first, but it stayed on my hard drive, and years later my agent asked me if I still had it, and sent it out again after I had finally been published.

The Last Dragonslayer is a real mix of fantasy and modern day conveniences and concepts like celebrity, commercialism and free markets. What was your inspiration when creating this world?

When I write, I write to entertain myself, primarily. Whenever you’re involved in a creative endeavour you have a world view. You’re exporting your way of seeing the world. The Last Dragonslayer world is kind of the off-kilter world that I see. In a world of magic, where we mix this medieval brutalism with faddy-commercialism. There are characters like Jennifer trying to negotiate media scrums, which is very now, while in this medieval world. There’s a mix and match going on – it allows for some strange new and exciting ideas from the fantasy genre. Just having a protagonist in a story about dragons and magic who can’t do magic was something that very few stories have done before. It was a case of saying, “What’s everyone else doing, let’s do something different”.

The Last Dragonslayer is, ultimately, the story of Jennifer Strange. What inspired the character and what do you hope people will see in her?

I like the idea of an ordinary person thrust into a situation that they didn’t ask for, nor did they particularly want. But they step up to the plate and deal with things in the best possible way they can, with resolve, guile and a lot of fortitude and bravery. Jennifer comes across as quite serious a lot of the time, but there’s a quirkiness to her as well. She doesn’t want any of the responsibilities thrust upon her, but she shoulders her duties with a brave stoicism – I kind of like that about people. We’d all like to think if something very adventurous happened to us we’d all step into the breach and march forward victorious. In real life that doesn’t happen and everyone runs around panicking.

In writing Jennifer do you think you’ve created someone young women can aspire to?

Jennifer Strange will be Ellise Chappell’s first big role on screen – were you surprised that the part went to an up-and-coming actress? I’m often asked who I’d have play my characters in film adaptations. I always say “an incredibly talented unknown”, because if it’s a star it’s always immediately recognisable as that person playing a character. But if you have someone of immense talent, but relatively unknown, then the suspension of disbelief is much more readily attainable. Ellise is Jennifer Strange. I was delighted.

The show has a superb ensemble cast, a mix of up-and-coming actors as well as a range of stars from comedy and drama backgrounds. What was your reaction when you saw the confirmed cast list?

It’s very important to have that mix of new and established actors because, when you think about it, the skills in the acting profession have been handed down from elder to younger since the days of Sophocles and the Greeks in an unbroken chain. There have always been young actors and always been old actors and they’ve always talked on the set or on the stage or on the wings giving the lore and helping them progress. It’s a wonderful thing for young actors to work on a cast with literally thousands of years of acting experience. Actors always help other actors in this unbroken chain of education that’s been going on for thousands of years. It’s wonderful to see.

What part of the story are you most looking forward to seeing brought to life in the finished product?

The quarkbeast. In the book, I purposely never really describe it. But it is absolutely terrifying. Anyone who sees it, the bravest man in the world, is absolutely rooted to the floor. I’ll be very interested to see how that turns out. 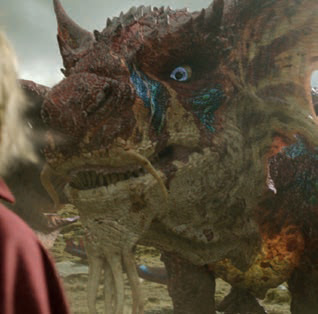