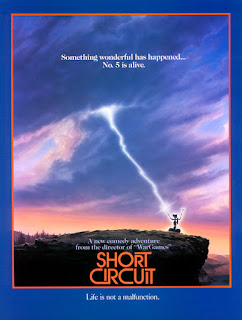 Our small band of Gunters here in the /G-f universe are reviewing every film mentioned in Ernest Cline's Ready Player One. This week Susan Omand needs input so watched the 1986 film Short Circuit...

Sometimes coincidences happen, even though you won’t believe me. There was I, this time last week, having just finished writing the RPO article on Star Trek and looking through the list of films to pick something for this week. I had just settled on Short Circuit because it was a film that I’d watched on TV back in the day and it seemed a light and fun thing that I could get all nostalgic about. Then I tuned into last week’s Was This Always Weird podcast for a good giggle at whatever film they’d picked to pick apart... and lo and behold it was Short Circuit! (Insert Twilight Zone music here.)

So anyway, that leaves me in a bit of a dilemma. The WTAW guys disassembled (geddit?) the film remarkably well (listen here) and didn’t leave me much to talk about regarding the huge political incorrectness of the casting of Fisher Stevens, with a “goodness gracious me” Peter Sellers-style accent, or the amount of lewdness, swearing and innuendo that’s actually in the film (how the hell did they get that past the censors enough for it to just be a PG?) They also talked a bit about the tech but that’s something I want to have another look at because, to me, the misrepresentation of 80's computing is a big part of what annoys me about these technology based films of the time.

Now, I don’t mean the robotics and the lack of dexterity of the SAINT prototypes. It’s understandable that, back in the day, they wouldn’t have the finesse to adequately crush ice and squeeze a lime for a gin and tonic, motor skills ability is something that tech is only just catching up with now, never mind 30 years ago. I mean things like the fact that people actually believed that all that was needed was oscilloscope imagery and a certain typeface implied “hi-tech” or when a computer controlled robot was malfunctioning, the text responses would really come back all higgledy piggledy fancy on the monitor. Or that the tracking device that was fixed to the errant prototype was so easily removable without a screwdriver. Or that the tracker-screen itself looked like a video game. Or the fact that there was a BRB (big red button) on each of the machines that was so easily accessible to just ... switch it off! They wanted us to believe these things have a nuclear core ffs – you can’t just “switch it off!!” And don’t get me started on the laser-y/explosion-y things or I may have to go all Mythbusters on you.

The truth is though, if they made it at all realistic looking it would be boring as hell to watch. I know, I’ve worked in these places. While the computer room really did look like a set out of James Bond with the big whirry tape decks and clackety printers, the reality of staring at the green screen day after day after day is not nearly as entertaining as they make out. I would love to tell you more about it but I’ve signed the Official Secrets Act.