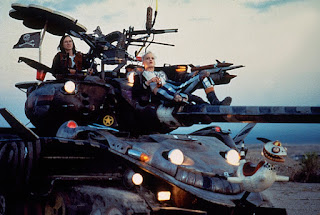 
“Listen up, cause I'm only telling you this once. I'm not bedtime story lady, so pay attention. It's 2033. The world is *screwed* now. You see, a while ago this humongous comet came crashing into the earth. Bam, total devastation. End of the world as we know it. No celebrities, no cable TV, no water. It hasn't rained in 11 years. Now 20 people gotta squeeze inside the same bathtub - so it ain't all bad.”

I like to listen to you. I sit in the background, stalking your social media profiles, taking in all your opinions and I like to make notes, as I never know when I can use your own opinion against you. Outside of Brexit/Trump which, as a topic, disturbs me to my core, you tend to debate comic book movies the most and, as a species, you are fascinating. You want so many things, you like much of what you get, you dislike much of what you get and there isn’t a film in existence that would tick every box you want ticked – except one. You see, I love Tank Girl, always have. Read the comics, collect the artwork and think the film is perfect on every level. However, you guys don’t and that I find perplexing, as it ticks all your required boxes.

You want a comic book film to feel like a comic book, to incorporate the feel of the source material within its screen project. Check.

You want a villain that feels like a bad guy straight from the page. Malcolm McDowell chewing scenery isn’t enough for you? Tough crowd but it’s still… Check.

You want action and adventure. Check.

You want a false reality but something that feels real. Well Tank Girl’s 2033 dystopia is not as far removed from our own reality as it maybe was in 1995 so definitely checks another box. Check, check and check!

You want more strong female characters. Hello? Jet played by the wonderful Naomi Watts is a scientist, engineer, pilot, compassionate, arse kicker of a character and fits your examples given on your social media pages. Check.

You want a soundtrack that fits the narrative. BIG HELL YEAH ON THE CHECKITY CHECK CHECK!

You want a main character that is funny and yet hard as nails, has moments of true love and cares for someone other than themselves but is selfish enough to do it all on their own if needed. They have to be a bit more like you and yet still have some kind of Hollywood glamour in their look. They have to completely buy into the project, embody the character and yet bring something of their own to the role. You are hard to please! Ryan Reynolds gets close to what you want in Deadpool for sure but Lori Petty as Tank Girl is possibly the best piece of casting in film history, not just in comic book movies. Massive CHECK!

You want a torture scene involving strippers, clients and a Cole Porter song. No? Just me then. Still a check. 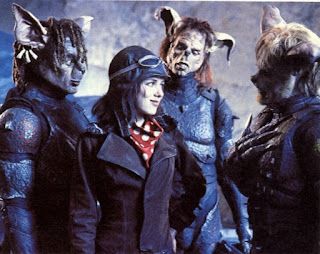 “Look, if you want to torture me, spank me, lick me, do it. But if this poetry shit continues, shoot me now, please.”

You see Tank Girl is brilliant. The budget restrictions in the mid-90’s may mean that the kangaroo make up may be slightly dated but personally I still quite love it. Ice-T looks really uncomfortable wearing it and that pleases me. The Tank, the plane, the entire dystopian look of the film are a comic version of Mad Max and some of the scenes could have come from Fury Road some twenty years later, so a lot of the ‘dated’ argument you bring to the table is null and void. The use of comic panels to show exteriors, or to move from scene to scene is a beautiful touch that, as a fan, really means quite a lot to me as it shows filmmakers that understand their audience, something not often found in today's saturated comic book film market, and the story isn’t trying to be some serious take on the political landscape but in spandex, it’s fun. Remember fun? We used to have it in the olden days, mainly from our comics.

Casting wise I don’t think there is a better representation of a comic book made for the screen. There are elements of the DC Universe that work but, whilst Superman is still not quite Christopher Reeve, half the jury is still out on Aquaman, we can all agree that BatFleck is great, so not perfect yet. Marvel are pretty close. Their Disney superheroes are brilliantly cast but, Loki aside, they are yet to convince me with any villain. I mean, Chris Eccleston – What the actual fuck was that about? Deadpool got closer to casting perfection and I think may get there in the end, and Guardians of the Galaxy is a modern take on Tank Girl so I consider it a tribute film made for big bucks.

You really should be careful what you actually wish for because you wished for Tank Girl and now you all hate yourselves whilst I’m trying to get a job in Water & Power.

DISCLAIMER: I know many of you will point to the fact that Tank Girl creator Jamie Hewlett hates this film, which Naomi Watts is embarrassed by, and that this is the film that director Rachel Talalay got screwed over by the studio in her final cut, and that Ice-T only did for the $800,000 wage. But you would be wrong to. Whilst I obviously adore the film and completely understand why you guys don’t, the whole point of this article was to prove to you all that your constant moaning and asking for more from your comic book films is not always a good thing. Tank Girl genuinely does tick all your boxes ...