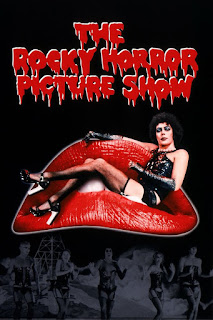 Our small band of Gunters here in The DreamCage universe are reviewing every film mentioned in Ernest Cline's Ready Player One. This time Susan Omand grabs some toast and a waterpistol to watch The Rocky Horror Picture Show...

No, don’t worry, it’s not the much vilified remake, it’s the original 1975 film. But that is something I want to pick up on before I go any further. I really enjoy the original film but I’m not nearly as “precious” about it as 90% of the Internet seemed to be when the vitriol started pouring forth on the mention of a remake. This is probably because I’ve seen so many different people playing Frank N Furter in the different stage versions I’ve seen (and the one I’ve been in but shush about that) that I realise every actor brings his own twist to the already seriously twisted character, such is the greatness of Richard O’Brien’s writing.

But I’m getting ahead of myself.

For those of you that don't know Rocky Horror at all, (not that there will be anyone in this category, will there? WILL THERE??) the story goes that a young, newly engaged couple are on their way to visit their old science tutor when their car breaks down on a dark stormy night and they try to find help. They are Brad Majors and Janet Weiss, and the only light they see is at a castle, where they meet the strange Dr Frank N Furter and his entourage, who offer hospitality on a very special night - the unveiling of the Doctor's latest creation as he discovered the "secret to life itself" - the eponymous Rocky Horror, a blond Adonis of a man. Seduction and betrayal follow as it is revealed that Dr Frank and his friends are not entirely what they seem....

The Rocky Horror Show started off in the theatre before it ever became a film. O'Brien had a passion for science fiction and horror B-movies and, as an out of work actor in the early 70s, he wrote to keep himself busy. Naturally that influence crept in as he combined elements of the humour in schlock horror B-movies, the ongoing fascination with aliens and the rhythms of rock and roll America to create the musical stage play that was such a smash hit he adapted it into a screenplay. The film soon grew a cult following as it most often showed as a “midnight movie.” The cinema-goers started dressing up to go to it, then started taking their own props and a whole “show within a show” was developed as the audience reacted to set points in the film in prescribed ways – throwing rice at the wedding scene, using water pistols for the rainstorm and holding up lighters for the song “There is a Light” among many, many others. There are now websites dedicated to “how to watch Rocky Horror” and it’s this audience participation and the fun to be had by going to the pictures with a group of friends, or making new friends through going to the film, that I think has lent the preciousness and nostalgia that fans hold so dear. 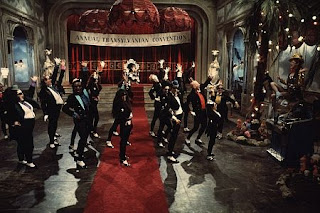 As for the film itself, I love it. Yes it’s cheesy and clichéd and, to be honest, it loses a bit of steam towards the end as a plot but the dialogue more than makes up for it. I mentioned Richard O’Brien’s writing before. If you need any evidence at all about how good his writing for the film is, ask someone who has seen it and they will be able to come up with quote after quote after quote. That’s how good his writing is. But the greatness of the film comes from the delivery of those lines and the characters and casting are just brilliant. Many of the original stage cast transferred to the film and you can really see that they are comfortable in their roles. Something that surprises a lot of people on their first watch of the film is that Susan Sarandon, who plays Janet, can actually sing quite well but there are two stand out performances for me in the film. Obviously, one is Tim Curry. He is just so deliciously wicked and camps up Doctor Frank in a way that truly lives up to the character’s theatrical origins. His facial expressions and vocal tone just drip sarcasm and sexuality in equal measure and boy can he rock a pair of heels. However, he can also convey the pathos and desperate loneliness underneath the showy out-going facade in a beautifully nuanced portrayal that can only come from a deep understanding of both character and creator. The other performance that really makes the film work for me is Charles Gray as the Criminologist and Narrator of the piece. Before I had ever seen The Rocky Horror Picture Show (and yes, there was such a time) I’d seen Charles Gray as Blofeld in the Bond film Diamonds are Forever and that residual shadow of a slightly sinister air transferred an added gravitas to his character in Rocky Horror, which makes the Timewarp explanation even funnier. However, he also manages to create order out of the chaos by providing a strong connective thread as the narrator, believable as being a researcher into the story who is reporting on his findings. Without that steadying influence, and the almost Hitchcock-like delivery of Gray, the film wouldn’t flow nearly as well as it does.

So, yes, I’m a fan of Rocky Horror but not a fanatic. I go and see theatre productions when they tour locally and I watch the film regularly just for the fun of it, even though it’s not quite the same throwing toast in the air in your own living room, but as a film it doesn’t colour my view of the world like it seems to for others. For me, there is always room for another Frank N Furter, another Riff Raff and another Time Warp and I probably will get round to watching the remake at some point just to see how a new generation has re-imagined the late night, double feature picture show.