Double-0 Christmas - The Spy Who Loved Me It's nearly Christmas so there's bound to be a James Bond film on TV somewhere. This week, we're looking back at Stuart Mulrain and Barnaby Eaton-Jones' series of articles on the 007 films. Here, Stuart Mulrain remembers The Spy Who Loved Me...

“An underwater city. Well, everyone needs to have their dreams!”

When my grandparents used to look after my brother and I during the school holidays, a go to favourite for keeping us entertained was to stick on a Bond film (or two) that they had taped off of ITV. During that time, the one I probably saw the most was The Spy Who Loved Me and it soon became one of my favourites.

The Spy Who Loved Me marked a rebirth of sorts for the Bond Franchise that saw Cubby Broccoli go it alone as sole producer on the Bond films, following Harry Saltzman’s departure from the series after running into financial troubles. It meant that Broccoli had something to prove with the film and he was willing to raise the stakes to make sure the world knew that Bond was still in safe hands.

Unlike previous Bond films, Broccoli wasn’t allowed to use any of the elements from Fleming's source novel other than the title, meaning that the film marked the first original story used in the series. The book is an odd entry in the series (notable for Bond barely being in it and even then only appearing in the last few chapters) that Fleming hated so much he refused to allow it to be adapted into a film or be published in paperback (it was only done after his death).

It took several writers (credited and uncredited) to perfect the script but it paid off and crafted one of the finest films in the series, offering up an almost perfect balance of elements that made the series so popular. It’s funny, exciting and – at times – down right terrifying.

The problem with Roger Moore’s first two outings was that they didn’t play to his strengths, instead forcing him to play a subpar Sean Connery Bond. The problem with the latter Roger Moore Bond films (other than him looking about 10 years too old for the part) was that they let the him dominate the character rather than just playing him. Spy marked the start of a trilogy of films that saw Moore at the top of his game as Bond (alright, Moonraker comes apart at the seams as a film but Moore is excellent throughout) and here he was at his peak.

Moore isn’t alone. Both Lewis Gilbert in the director’s chair and Ken Adams' set design were at the top of their Bond game with Spy. Adams' sets were always something to behold but the sheer size and spectacle of his sets here give the film a sense of awe that set a new benchmark for the series.

That’s not to say the film isn’t without its flaws. The score (very much of its time) sways widely between classic Bond and 70’s porno and lacks all of the style, flair and class that John Barry brought to his score. It’s also lacking a particularly memorable villain. Yes we have Jaws – who steals the film on the bad guy side – but Curd Jurgens’ Stromberg is just another villain at the end of a desk pushing buttons. It’s not Jurgens' fault - and he’s actually very good in the role – it’s just that the character is written as a Blofeld wannabe lacking in any real identity of his own.

These are minor quibbles though in a film this good. Richard Kiel as the aforementioned Jaws is the perfect henchman, silent, terrifying and – I know this is going to sound very strange – oddly sweet, kind of like an innocent character who has found a skill in doing very bad things. It’s a testament to Broccoli that he had the foresight to keep the character alive at the end of the film (suspecting that he would be hugely popular). 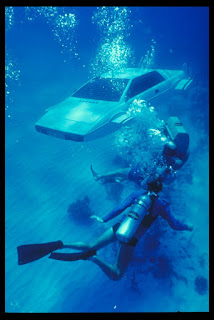 The film is fairly light on the gadget side, but it more than makes up for it with its main showcase that is the Lotus Esprit. You know you’re in for something special when Q doesn’t even get chance to tell you all the optional extras that come with the car (a complete reverse of Goldeneye, but more on that in a couple of weeks). There’s a weird boyhood fantasy about a car either flying or driving in the water and over the space of two films Bond addressed both. Scaramanga’s car flying off in The Man With The Golden Gun was oddly unsatisfying, but the Lotus hitting the water delivered everything you’d hope for and more.

And then there are the Bond girls. This is very much Barbara Bach’s film, with the others just there to look pretty and get killed off (most memorable in that field is Caroline Munro’s Naomi). I don’t mind admitting that I had something of a boyhood (and manhood) crush on Bach’s Major Amasova. She is perfect in the role, portraying both the character's coldness and vulnerability as a strength. It’s a shame that, as with most Bond girls from the time, she is reduced to nothing more than the cleavage showing damsel in distress who has to wait for Bond to save her.

Overall though, The Spy Who Loved Me saw Bond return to form - after three frankly lacklustre instalments just prior – providing the jewel in the crown of the Moore era and also one of the undisputable highpoints of the series as a whole.