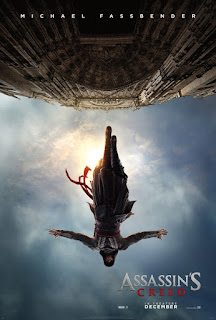 No harness. No CGI. No Going Back. If you watch Channel 4 on Sunday night you will see Hollywood Stuntman Dave Grant make an Assassin's Creed 100ft 'Leap of Faith' freefall live on air...

Channel 4 have announced a world first broadcast stunt will be attempted live in a TV ad break. On Sunday 18th December, Hollywood stuntman Dave Grant will free fall from almost 100 feet at a speed of over 50mph live on air, in celebration of the UK cinema release of Assassin’s Creed on 1st January 2017.

The highly ambitious feat is a bold homage to the iconic ‘Leap of Faith’ jump featured in the film – when Michael Fassbender’s character ‘Aguilar’ free fall dives from the top of extremely tall structures. The film’s Director Justin Kurzel opted for real life stunts in place of CGI wherever possible and the ad break has been created in celebration of this.

Michael Fassbender said, “The action sequences in the movie are shot in an old-school fashion, shot in geographical locations with real people, with very little CGI or special effects. In the movie Damien Walters performed a record breaking Leap of Faith from 120 ft. unassisted by wires and ropes, which was amazing to see. I’m very excited that Dave Grant will be doing 100 ft. Leap of Faith live on television next week.”

Dave Grant is one of only a handful of stuntmen capable of performing a free fall from this height meaning jumps such as this are rarely attempted, even on film sets. The ad will be filmed outdoors at Millennium Mills, a derelict flour mill in Newham, London where there will be many variables for Dave to overcome on the night, including negotiating the dark, winter weather conditions and jumping live on national television.

The dramatic 100 second ad break, produced by creative company The Outfit, will air at approximately 9.10pm during Channel 4’s critically acclaimed drama Humans, when viewers will also be treated to an exclusive first look at footage from the film.

Cameron Saunders, Managing Director UK Theatrical, Twentieth Century Fox said: “Assassin’s Creed is going to be the event movie of 2017, with nail-biting, never seen before breathtaking action sequences. What better way to bring a taster of this adrenaline to audiences throughout the UK than this daring live Leap of Faith? There’s plenty more where this came from when the movie releases on January 1st.”

Watch a clip of the film itself showing the "real" leap of faith: