TV - Doctor Who: The Christmas Teaser 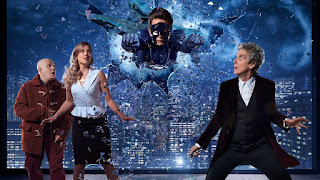 ...or "I’ve seen the Doctor Who Christmas Teaser and Oh God I find Doctor Who funny now" by Reece Morris-Jones...

I am a Doctor Who fan. Unequivocally. I love Doctor Who to the point some would call insanity. I liked Dinosaurs on a Spaceship, one of the most hated episodes for years. I adored Love and Monsters. I even liked some of the last season of Doctor Who - something likely to get you stoned in certain areas of the internet. Yet I’ve rarely found Nu ‘Who actually funny.

Despite writing what’s regarded as a comedy classic (Coupling), Steven Moffat’s run of Doctor Who has been almost 100% humour-free for me. As the quality of the show has declined, whatever fun I once had with it has morphed into a masochistic determination to keep watching despite everything. At least this season won’t be so bad I tell myself.

Yet despite all the quality comedy japes Moffat has written, such as having Matt Smith gesticulate every few seconds like a man having a seizure, or including a comedy actor and hoping something comes of it*, nothing has made me come close to tittering.

However, something clicked after viewing the teasers for the Doctor Who Christmas Special. My brain, tired of fighting, broke. I laughed like a madman at the jokes. Guffawed at the HILARIOUS piss-take of superheroes. I mean, take this clip:

Its brilliant! Moffat, (last showcasing his genius in Sherlock Season 3) has identified the completely original notion that superheroes are inherently silly. Now The Doctor is meeting one! And - can you believe it?! - he doesn't know what to make of superheroes!! The very concept is making blood burst out of my anus it’s so funny.

In fact, I had to stick a broom up my arse to stop the flow of blood that threatened to ruin the carpet. At which point, it shot from my cock as I noticed Matt Lucas making a funny face. This is next-level shit, people. I do have to spend some money on a new carpet now though.

The Doctor Who Christmas special is showing on Christmas Day. I, for one, will be sitting down to enjoy it like the drooling Pavlovian dog I am. With some paper over the carpet this time. You've gotta be prepared.

The Doctor Who Christmas Special is showing at 5.45pm, Christmas Day.

*If you want to blame anyone for this trend blame Judd Apatow, who seems to forget that comedy is hard work, made to look like improvised madness and not just a bunch of people riffing for a few hours.

[Editors Note: No reviewers were harmed in the writing of this article... yet]