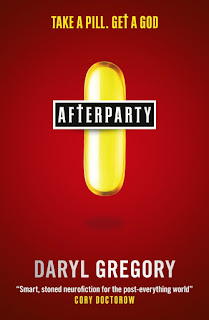 A near-future science fiction story about crime and drugs? Sounds like a job for Steve Taylor-Bryant...

Due to my miraculous survival of the 1990's and early 2000's drug culture, Afterparty by Daryl Gregory should allow me a sober look at some of the things I got up to as well as telling a story. We shall take our 'Numinous' and open a portal and find out.

There has been a technical revolution. Anyone with a keyboard and half decent connection to the internet can now design, distribute and take any drug they choose. Lyda Rose overdosed on Numinous, a drug she helped to create when she and three other neuroscientists were trying to cure Schizophrenia, and now has an imaginary guardian angel in her head in the guise of Dr. Gloria. In the Toronto rehabilitation facility that Lyda is staying in, a teen takes their own life after believing God has abandoned them. This starts Lyda on a journey. The teen has been taking Numinous and now Lyda, Dr. Gloria, and a fellow patient, Ollie the ex-spy with addiction issues to memory and pattern narcotics, must cross the border into the United States and root out the source of this new wave of designer drugs.

Stunning, frighteningly plausible, trippy. Daryl Gregory has opened a whole big can of worms with Afterparty. This is not just a book about the highs and lows of drug taking, this is a book that questions so much, questions some people might not be ready for. Questions like 'what is belief?' and 'can chemicals really fool our brains into thinking what we want?' I read, in the press pack I received for this book, the following sentence...

It's Elmore Leonard and Philip K. Dick road tripping down neural pathways, with Hunter S. Thompson howling in the back seat.

I get what the PR is trying to say, and I know that marketing often exaggerates these bits of blurb for impact, but they are not that far off in my estimation. The future described and the story twists are definitely something Philip K. Dick could have written and it's always easy to bandy about Thompson's name when drugs are involved. Whilst this is not a sci-fi version of Fear and Loathing (could you imagine a more elaborated version of that? I have chills) the comparisons are not wholly unfair although I believe Gregory's voice is talking to a generation that just wouldn't 'Get' Thompson.

The writing is gripping, exciting and flows at a pace both adrenaline inducing and calming at the same time. The drug effects are spot on, the neuroscience believable, the characters sympathetic. All you could want from a novel like this.