Book - Fear and Loathing on the Campaign Trail '72 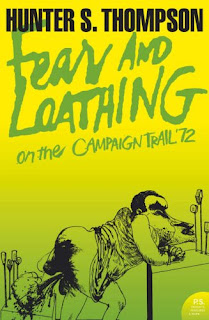 With the Inauguration of the 45th President of the United States happening today, Steve Taylor-Bryant takes a trip back in time to read Fear and Loathing on the Campaign Trail '72 by Hunter S.Thompson and asks whether politics have changed since that time...


So much for Objective Journalism. Don't bother to look for it here — not under any byline of mine; or anyone else I can think of.

Often in times of hardship we look to the past for consolation or a proof that things might get better. Instead we find that the world has always been the same. What we are experiencing now was the same insanity and gloom that previous generations went through. How do we know this? Because at every step of existence someone has recorded those days events and we look back upon these tomes as we learn about our history or study how we got to where we are. I do this a lot. I've always enjoyed history. I do this nowadays mostly with 20th century politics. You see we have lived through things that are as bad as today. For every Donald Trump preying on the electorates fears and pushing his party and, possibly, his country further right, we have had an Adolf Hitler who did the same, for every jihadist using religion or territory as an excuse to cause mayhem, we have had an IRA do the same, or for every fear mongering news corporation that ramps up tension in its people, we have had a fear mongering government that depends upon that fear to control its people. Human life is as bad now as it has ever been it's just today with 24/7 news and opinion it's easier to make it seem bad. I miss good journalism. I don't mean some hack that can quote some right wing nut job for click bait, I mean actual journalists plying their trade and trying, often in vain, to find a receptive audience for their investigative story. You don't get this any more. The media has never been truly based on morality but on occasion you get a great man or woman who will write their columns or stand in front of a camera and scream 'this is wrong'. We don't have an Edward Morrow any more to face down a McCarthy. We don't have a Kate Adie to tell the UK from some distant war torn land that WE did this, we the people caused this problem. And, with Trump being sworn into Office today, we didn't have a Hunter S. Thompson going up against Richard Millhouse Nixon and championing the little known McGovern. There had been trouble at political rallies before, anyone who thinks the scuffles at Trump's recent appearances were newsworthy obviously doesn't remember Chicago in 1968 and it's with this change in journalism that I thought I'd revisit one of my favourite go-to books on American political campaigns; Fear and Loathing on the Campaign Trail '72. 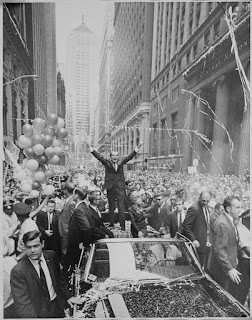 This may be the year when we finally come face to face with ourselves; finally just lay back and say it — that we are really just a nation of 220 million used car salesmen with all the money we need to buy guns, and no qualms at all about killing anybody else in the world who tries to make us uncomfortable.

Thompson's book isn't constructed like most books covering politics or history and it seems strange to call a book forty odd years old a breath of fresh air but that is just what it is. It's a mixture of the Rolling Stone magazine articles, transcribed interviews, random thoughts and tangents and cuts through any bias or bullshit from the off. The journalistic side of Thompson gives great insight into the candidates themselves, investigating and reporting any small comment or event and commenting on it. Whether that be a conversation in Nixon's limo about the Washington Redskins or asking McGovern a question whilst sharing a urinal on a campaign stop, Thompson manages to capture a side of each you might not usually get and it all adds to a fascinating insight into not just the men and women involved in a campaign but into what life can actually be like on a relentless tour across the country. Then there is Hunter the person who can unleash without the conventional shackles of a White House reporter, because he's not, and this allows for an unbridled objectivity not normally afforded an author. Thompson tells it like it is, writes from his gut and doesn't pull punches. If he sees something he doesn't like he says so. A great example would be when Hubert Humphrey flip flops on the race issue to try and gain momentum and take down some of his opponents. Hunter spots this and remarks "There is no way to grasp what a shallow, contemptible and hopelessly dishonest old hack Hubert Humphrey is until you've followed him around for a while on the campaign trail. The double-standard realities of campaign journalism, however, make it difficult for even the best of the 'straight/objective' reporters to write what they actually think and feel about a candidate" however Thompson is not a straight journalist and will, and does, put his opinion on paper.

There are no double standards with Hunter S. Thompson. During the nomination he was for McGovern, a man he considered principled and that could bring a fresh 'new politics' of truth and honesty to the game but, when McGovern had the democratic nomination and his advisers convinced him to be more conventional to win, Thompson said so and turned against his chosen candidate. He genuinely felt that McGovern failed purely on this turn in policy, that he was the nice and honest guy but couldn't play the dirty politics that his team wanted him to play. Thompson comments towards the end that McGovern is "what Robert Kennedy once called, 'the most decent man in the Senate.' Which is not quite the same thing as being the best candidate for President of the United States. For that, McGovern would need at least one dark kinky streak of Mick Jagger in his soul."

The usual mix of drug use and references are included and Thompson very often calls the adrenaline of the race a drug itself naming himself a "politics junkie" and realising that he now "understands why the men we elect to the Presidency may have needle tracks on their integrity."

We've come to a point where every four years this national fever rises up — this hunger for the Saviour, the White Knight, the Man on Horseback — and whoever wins becomes so immensely powerful, like Nixon is now, that when you vote for President today you're talking about giving a man dictatorial power for four years.

Did I learn anything new reading this book? No. I've read it thirty odd times and, whilst I keep enjoying the read, the past and reality stay the same. For Nixon read Trump, Humphrey read Clinton, and McGovern read Sanders and the cast of characters is the same. The only difference between now and then is the speed and access to media comment. Sometimes you would have to have waited weeks, months or even years to gain Hunter's insight, nowadays anyone with a mobile phone can be a commentator. I did, however, wish that I could merge Hunter's past with our present. Something as good as Fear and Loathing on the Campaign Trail '72 shouldn't be a book or a collection of magazine articles published after the event. They should be an in the moment event and I have dreams involving Hunter S. Thompson commenting from a rally or a town hall on the medium of Twitter. That's the only thing I would merge or change - Hunter's ability to communicate quicker. I firmly believe that if people like Hunter S. Thompson had been able to access what we access, to comment in the moment, that maybe our present or future may be different to his past. Alas it's not meant to be.

For those people I know that I spoke to whilst writing this article who told me Nixon wasn't that bad and that he didn't treat the electorate as badly as Trump will now that he is President, I leave you this photograph... 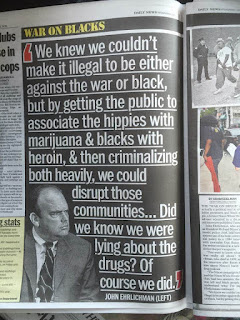