Doctor Who - The Web Planet 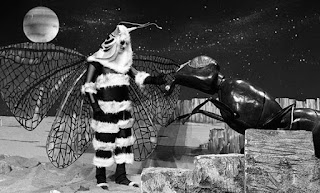 Our Doctor Who expert, Tony Cross, is journeying through all of time and space to bring us his thoughts on every available Doctor story. Today is the First Doctor adventure The Web Planet...

I'm going to put my cards on the table straight away here. I love The Web Planet. I love it for daring to do something that, even now, Doctor Who would struggle to do convincingly: put the TARDIS crew down on an alien planet populated by giant insects. This is a genuine alien planet. These are aliens. They behave like aliens. They talk like aliens. They have cultures.

Yes, it's too long. But so are a lot of Doctor Who stories. Yes, Richard Martin's direction can be a bit careless but he does a fantastic job of wrangling actors and insects in the main. Yes, with modern eyes it looks ridiculous. I explained this story to my workmate Lucy, who thought it sounded silly. When I showed her a clip she said it was even worse than she guessed. I know The Web Planet isn't the first story I'd reach for if I was trying to convince a non-Doctor Who fan of the glories of 1960s Doctor Who but because of that you miss out on one of the best Doctor Who stories ever made.

There. I've said it.

Yes, suspending your disbelief can be difficult but if you do you can wallow in one of the most ambitious Doctor Who stories ever made. It reaches, from the moment you step onto Vortis, for an atmosphere of genuine alienness. It's not just the impressive set but the strange flaring blurred camera work, which is deliberate. It's not just that everyone except the main TARDIS crew is effectively a giant insect or the weird soundscape. It's not just the movement of the actors, especially those playing the Menoptra, is inhuman or that those aliens that speak don't speak like human beings. They have rhythms of their own or, in the case of the Optera they speak in metaphor. It's all of these things coming together.

It's also a surprising dark story too. The end of Part Two as Barbara witnesses the Zarbi take off a Menoptra's wings is genuinely quite horrifying even if we don't see it happening. It's Barbara's horrified reaction - and Jacqueline Hill is brilliant here again - that tells us that what we're seeing is bad. The Zarbi deliberately cripple the Menoptra as punishment.

There's Vrestin's (Roselyn de Winter) conversation with Ian. When Ian asks what happened to the rest of the landing party her reaction both in terms of body language and the sound of real distress she gives off is really quite moving.

Then there's the nasty death of Nemini, the Optera who sacrifices herself to save Ian, Vrestin and other Optera from death by acid. It's a really unpleasant death but I suspect a lot of people find it difficult to take seriously because of the slightly comic nature of the Optera. For me though that made it worse. The Optera are harmless bouncing bugs. They'd be rather cute if it wasn't for their oddly metaphorical way of speaking and their leaders growling tones. And Nemini dies in that terrible way.

The Optera are descendants of the Menoptra who fled underground when the Animus arrived on Vortis. They bounce a lot and I've head-canoned this as their race memory of the moment just before their flying ancestors took off. It's a half-remembered attempt at flight.

The Animus is the stories big bad. It's a sort of tentacled parasite that speaks to people with a creepy voice, which occasionally comes via a large tube. At least when talking to The Doctor. It's not the most impressive effect, which the Doctor himself comments on. He refers to it as a 'hair-dryer thing'. It seems to have landed on Vortis, grown and taken mental control of the Zarbi (who are otherwise harmless and a little stupid) and then sucked the life out of the planet. It has plans to take over the Earth too in the end. It's dwells inside something called the Carsinome so I'm assuming the Animus is a kind of cancerous parasite in writer Bill Strutton's mind.

The final sequence as everyone comes together to finally try and destroy the Animus is a bit confusing as people flail around confused by the light, the Animus's mental powers and its tentacles but Barbara saves the day. I notice William Hartnell's acting at this point, when he is trapped in the Animus's tentacles, could be described as 'minimalist'. If we're being kind. And I am.

A brief sideline here to mention the First Doctor's ring, which seems to be a proto-sonic screwdriver. Capable of doing whatever a writer requires it to do for plot purposes. I suppose if the Doctor can have sonic sunglasses then a sonic ring isn't out of the question.

If you haven't watched this story you've also missed a rather brilliant speech from Jolyon Booth, as Menoptra Prapillus in Episode Five. It's rather beautiful and delivered as if it is a Shakespearean soliloquy. And I think that's also a key to why I love this story. It's that everyone in it is doing their damned best to treat it with all seriousness. They're either dressed up as giant moths, bugs or ants or interacting with giants moths, bugs and ants but no one is treating it as a joke. It's absolutely serious, which gives it a weight.

I should also take a moment to applaud the set design, especially the Temple of Light, which looks amazing both inside and out. The Carcinome too, although obviously drapes at some points looks rather good and - again - feels genuine alien.

And in the end that's why The Web Planet is a work of wonder. It's the only Doctor Who story that genuinely portrays an alien world and alien races that feels genuinely like a 'real' alien world. It reaches for the stars. It's as ambitious as any Doctor Who story will ever be. I suspect you'd struggle to re-make it now even with all the technological advances since 1965. There isn't another story in Doctor Who that ever tries as hard.

It should be applauded for its ambition and for its seriousness. It should be admired for the performances of everyone in it who tries hard to make you forget that you're watching men and women in costumes. It has darkness and majesty. Is there another Doctor Who story out there that would have tried to film the Menoptra swooping into the Crater of Needles and the battle that follows.

I love The Web Planet. I love it a little more each time I watch it too. As I notice new things. So yes, warts and all this is a magnificent piece of Doctor Who.