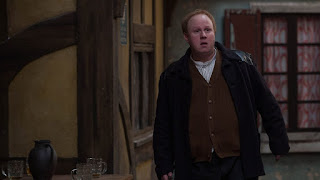 It is likely now well known that I am a huge fan of Shakespeare so, when the talk in The DreamCage office turned to things of a dreamy theme-y, my first thought was how I could do an article about the fun and fickle play from the Bard.

There have been many stage and screen adaptations of both A Midsummer Night’s Dream and Shakespeare plays in general over the years, some more successful than others. And I am not averse to a bit of updating and creative licence. I am, after all, the only person I know that really enjoyed Baz Luhrmann’s Romeo and Juliet. However, having taken the decision to watch a new version of A Midsummer Night’s Dream for this article, I approached this version of the play, adapted and directed by Russell T Davies for the BBC last year, with a lot of caution, especially having seen the cast (I’m not a fan of Matt Lucas’ work at the best of times) and read some of the reviews at the time it was shown on TV, one of which called it “Shakespeare reinterpreted for Doctor Who aficionados” and others which ranged from “one of the best interpretations of the play I have seen in recent years” to “a misconstrued, overwrought, inept production.” Ah. OK then. Let’s give this Midsummer Marmite a go anyway.

For those of you not familiar with the story, I’ll try to untangle it a bit because it can get complicated, as all good comedy farces should. The ruler of Athens, Duke Theseus and his betrothed Hippolyta are preparing for their wedding when Egeus, his courtier and master of revels (not the chocolatey ones) arrives with daughter Hermia, along with the poet Lysander and the soldier Demetrius. Hermia and Lysander love each other but Egeus wants Hermia to marry Demetrius who is, in turn, loved by Helena. Keeping up so far? OK. Duke Theseus insists Hermia marry Demetrius, or either die or become a nun so Hermia and Lysander decide to run away and to meet in the forest. Hermia tells Helena of their plans, and she in turn tells Demetrius, in the hope that he will like her more for telling him. Demetrius chases after the eloping couple, and Helena chases after him. Meanwhile a group of tradesmen have been tasked with performing a play at the wedding of Theseus and Hippolyta and head into the forest to rehearse. Add to that the fact that Oberon and Titania, the King and Queen of the fairies, are already in the forest, arguing over a stolen child. Oberon gets the mischievous Puck to mix up a potion which, when squeezed into the sleeping eyes of Titania, will make her fall in love with whoever they see first when they awake i.e. Oberon and the arguing would stop and, on seeing Demetrius reject Helena Oberon also wants the drops in Demetrius’ eyes just for kicks. Still with me? Well, Puck, on finding the actors rehearsing, gives Bottom an ass’s head and the ensuing ruckus as he scares off the other players wakes Titania who immediately falls for the donkey-headed Bottom because of the spell. In the meantime, Puck has mistaken Demetrius for Lysander who, on waking, falls in love with Helena. Demetrius gets jealous and challenges Lysander to a duel, Hermia sulks and Helena thinks everyone is just taking the piss. It’s then up to Oberon and Puck to sort the mess out but things always get worse before they get better. “The course of true love never did run smooth” indeed.

Well... I really did love it. The updating of the settings and characters while keeping the dialogue to the original language took a lot of creative license but worked very very well. Granted, for purists, RTD didn’t stick exactly to the original text so throw away (well, place gently and reverentially to the side) your copy of Shakespeare’s play and think of this as the Reader’s Digest version, all the superfluously florid prose taken out but enough left to be more than a skeletal retelling of the story. The production values were, as expected for the BBC, very high and I actually did find it feeling a quite a bit like a Doctor Who episode with the special effects and sets used, especially that cobbled street and the forest. And Murray Gold’s hand in the music as well as Russell T Davies distinctive direction. And Matt Lucas. 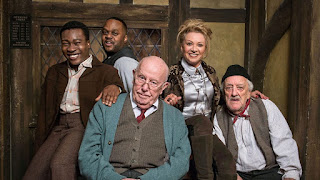 To be honest, he suited the part very well and was *whisper it* enjoyable to watch as Nick Bottom, with the right level of annoying brattishness alongside the rest of the, quite star-studded and delightfully argumentative, band of thesps rehearsing the “play within a play” of Pyramus and Thisbe. In fact they reminded me very much of drama groups that I have been involved with in the past in being far more about politics than performance so it was perfectly pitched . Nonso Anozie and Maxine Peake as the rightfully regal and deliberately disdainful Oberon and Titania also worked a lot better than I thought it would. Peake, especially, I find can be a bit cold and clinical in her performances but that helped Titania to come across as a lot stronger and more of an equal to Oberon than I have seen her played before.

However, there are two stand-out performances for me. The first was John Hannah as Theseus. As an actor, he really deserves much more recognition than he currently gets – his portrayal of the arrogant leader Theseus was truly commanding! And the second was Kate Kennedy as Helena – her pinpoint comic timing and deadpan delivery lifted a weak “damsel” character into a much more notable role.

So all in all, I’d heartily recommend this as a light, but complicated, story that looks incredibly impressive and carries the essence of Shakespeare if not the purist pomp. If you don’t know, or don’t like, Shakespeare in the theatre, this is a great way to experience the fun of the story without the intimidation of it “being Shakespeare” but, if you DO love theatrical Shakespeare, forget about canon and “how it should be done,” just enjoy it for the story it is and remember the words of Puck...

If we shadows have offended,
Think but this, and all is mended,
That you have but slumber'd here
While these visions did appear
And this weak and idle theme
No more yielding but a dream