Film - Beyond the Gates 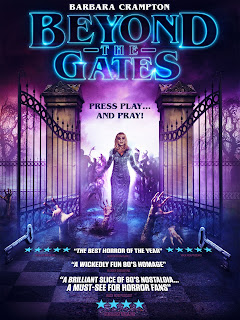 To coincide with the February release of the VHS-game-focused new horror movie Beyond the Gates, take a look back at some of the scariest VHS board games of the mid 80s and early 90s...

It's a fictional VHS game that gives its name to the title of this tense and fun new horror movie. Beyond The Gates is a modern horror which acts not just as a loving tribute to the these games but also to classic '80s horror and gore. In the story, seven months after their father’s disappearance, estranged brothers Gordon and John Hardesty reunite to liquidate their Dad’s dusty old video rental store. Soon afterwards they unearth the old Beyond the Gates VHS board game. It turns out that the game acts as an inter-dimensional hub to a nightmare world where their Father’s soul is trapped. He can only be saved by the two brothers coming together to play and defeat the game.

However, VHS board games were a phenomenon in their day. In the 1980s toy companies came up with the idea as an innovative way to incorporate the home entertainment boom with the classic fun of board games and the burgeoning roleplaying games like Dungeons & Dragons. There was basically a set video featuring a scary or fantastical guide which played out differently each time on the board based on the players choices and dice roles, much like the adventure books you used to get where the reader turns to a different page in the book depending on decisions they make while reading. Some have stood the test of time, like Atmosfear which released 4 standalone games and various expansions from 1991 right up to last year, others... not so much. 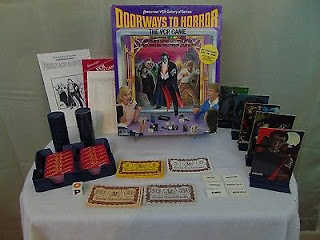 Doorways to Horror was one of the earliest VHS games released and it opted to bring the classic horror movie world to life. In the game, the players move around the board and encounter different monsters like witches, zombies, vampires and werewolves who they need to defeat. Classic horror movie clips accompany the action which were taken from movies that existed in the public domain. The object of the game was simply to reach the end of the board having defeated all the monsters, and the game is fondly remembered for its terrible puns and its charmingly low-budget retro clips. 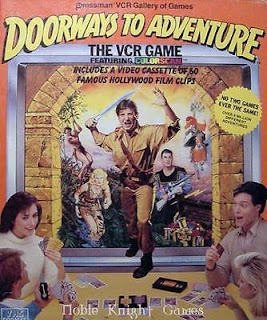 Doorways to Adventure focused more on the action adventure, along the lines of the Indiana Jones series. The VHS tape in this case offers the players a visual cue of mystical objects they must barter and bribe each other for. As is common for this type of game, the tape also acts as a game clock. The players compete against one another to collect as many artefacts as possible and the player with the highest value treasure at the end of the tape wins. Once again the material on the VHS is low-budget but the game was extremely popular at the time. 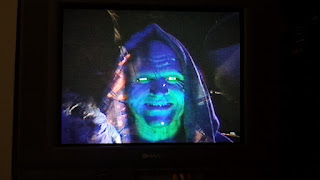 Probably the most well known and one of the most popular games in the VHS board game genre, Atmosfear (known as Nightmare in some regions but not to be confused with Knightmare the kid's TV series) sold 2 million copies in just two years and spawned several sequels and three expansion games. The horror themed game is set in a place called “The Other Side” and each player adopts the persona of one of the set characters who each rule over a province. The VHS and game is controlled by an actor who portrays the evil Dungeon Master style 'Gatekeeper', who shouts at the players and controls the hour long battle. The players must collect keys using dice on the board and reach the middle of the game before the time runs out. The well-made VHS has increasingly pulse-pounding music and evolving creepy make-up FX on the Gatekeeper that ramp up to a tense, scary and usually hilarious finale. Atmosfear is still available on DVD. 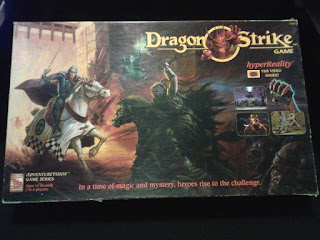 This adventure themed game was based on the popular role-playing game Dungeons & Dragons. The VHS tape is used to set the scene and once again works as a visual aid to the adventure that the players undertake. The tape made use of both live actors and CG monsters and magical effects. Each player chooses from five roles: dwarf, thief, elf, wizard or warrior and each role comes with ratings such as speed, strength and hit points. The Dragon Master (a designated player) chooses a mission from the adventure book and the game begins. Markers and cards challenge the players, which may force them to face monsters or traps as they make their way around the board. The mission must be completed within a set number of turns. The VHS game is now highly comical thanks to its over the top acting and poor effects, but it did help introduce novices to role-playing games as their popularity was beginning to dwindle in the '90s.

Precision Pictures presents Beyond the Gates on Digital from 13th February & on DVD 20th February, 2017