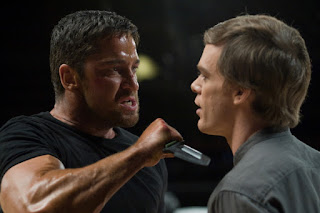 If gaming and technology keep advancing at the current rate Steve Taylor-Bryant can see a time when Gamer becomes a documentary...


People are evil, they are voyeurs, they accept what is put in front of them and they consume what marketing dictates they should. Obviously not you, good reader, the "other" people. Yes those statements are very simplistic and I can’t really back them up with undeniable proof, although watching the US Helicopter Gunship kill civilians when Wikileaks released it gained more viewers than maybe it should, most of the population watch violent or horrific things in their pop culture consumptions, and the audience for reality shows impresses on me that no matter the size of your IQ you really watch and participate in some awful crap. Enter 2009's film Gamer.

Gerard Butler plays Kable, a death row style inmate that enters urban warfare battles to work towards his freedom. The prisoners, or Slayers, wear special equipment that allows the good folk at home to control them, with Kable being controlled by a seventeen year old boy. Ken Castle however wants to make sure that Kable does not win his freedom. Castle, played by Dexter star Michael C. Hall, is the violent version of a Steve Jobs or Bill Gates, and created the gaming tournament that makes up the (somewhat limited) plot of the film.

The thing is, when I first saw this film I just watched is as an action flick, the kind of film you turn your brain off for and forget shortly afterwards but, with the discussions in The DreamCage offices recently surrounding the evolution of games, consoles and equipment, and most importantly YOU the gamer, I watched again with my brain completely switched on and was shocked at where my imagination took me.

Most normally sound-of-mind people will look at the film and say “don’t be daft that could never happen”, but I come from the generation that said the same thing about mobile communicating devices and the fact the Compact Disc wouldn’t be a threat to my cassette collection. This was only thirty years ago, so who is to say with our modern obsessions and technological improvements that in another thirty years the concept of eradicating violent prisoners via real life games wouldn’t be a daily occurrence? Our love of blood and society’s penchant for violence has not improved throughout humanities evolution, the internet is becoming a breeding ground for those with sick and twisted ambitions and executives really will produce any television they can if they think they can earn money from the the slaveminds of the public. Don’t believe me? I give you The Farm on Channel5 a few years ago where 2 million people tuned in to see a numpty celebrity of some description masturbate a pig! Whilst there is an easily pleased and easily fooled general public, they are at the mercy of those who deem greed to be good.

Think about what I have said. Watch Gamer. Think about the evolution of technology and personality in your own brief lifetimes and tell me that Gamer couldn’t happen. The next generation of games involve a serial killer.