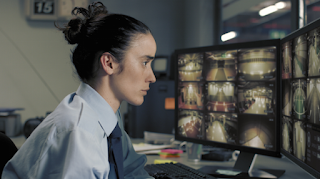 So this really could have been anything. The loneliness of monitoring screens on 12 hours shifts is a job I know only too well from my past lives in IT departments. There are long periods of monotony interspersed with frantic activity when something goes wrong so you can’t afford to let your attention wander very much at all. Couple that with the fact that, until they brought in EU laws saying that you could no longer work a shift on your own, you could go for the full 12 hour shift without seeing another soul, all sorts of scenarios run through your head. Most of these were scary/stalkery in theme in my head because of big empty warehouse-like computer rooms in the middle of the night and, often, this is the subject of films that use the “security guard” set up, but this one is different. None of them was ever anything like the film that springs from this simple but intriguing synopsis.

Luna and Diego are the parking lot security guards. Diego does the night shift and Luna works by day.

What a glorious little film! I’m going to have to spoiler the start so that I can talk a bit about it so, if you don’t want to read on, I will sum up now – watch this film and smile.

Why smile? The start of the film sees the start of Luna’s day shift (and the irony of Luna, the moon, working the day shift is not lost on me) and she wanders into work in her summer clothes and sandals, to change into her severe uniform, pulling on with it the formality of the job. Heading for the security guard’s booth she exchanges few words with her night shift counterpart Diego, who leaves moments after she gets there, allowing her to switch off the radio that he has been listening to. A regular, boring, day ensues until, mid afternoon, she gets a phone call from the building supervisor to say he’s had a complaint from one of the residents that the tail light got broken on his car. She types the time code that the supervisor gives her into the camera monitoring software and spots the culprit. It is her opposite number, Diego, practising dancing in the open spaces of the car park, who has inadvertently kicked out the light on a spin turn! She covers for him on the phone with the boss, saying it was a quiet night, and goes to the spot in the carpark that the camera was pointing at where she does indeed find the broken glass of the car light. She picks it up and, tentatively facing the camera does a few dance moves of her own before heading back to the office. She leaves the broken glass where he will find it, along with a post it note of the camera and timecode of her own danced “message” but says nothing more than normal at the shift change. Coming back on duty for her next shift, again all is as before but there is a new post it stuck to the monitor with a different time code. So begins their unusual communication through swapping time codes until, one day when she comes on shift there is no post-it waiting for her.

I won’t spoil the end because you really need to watch it. And the reason for telling you all the above is so that I can comment on three things. Firstly, the music on the soundtrack is utterly wonderful. A simple melody picked out on Spanish guitars and piano, rounded out with light strings and woodwind, it suited the movement beautifully. Secondly, the chemistry between the two lead actors, Nicolas Ricchini playing Diego and Lali Ayguadé playing Luna, positively fizzed on the screen even though they were not often physically close in the film, growing stronger as time passed – you can tell that they have worked together before as there is a natural ease there. But, mostly, the dancing... oh the dancing! I have seldom seen contemporary ballet executed so strongly, elegantly and fluidly. Never did it look awkward and or clunky or feel too uncomfortably intimate to watch, as I find this style sometimes can. I honestly sat open mouthed, my heart leaping and spinning as they leapt and spun through the carpark. Quite, quite superb!

And all of that in just 15 minutes. Wow. An all-round beautiful film, sensitively directed and choreographed and pitched just right to be dreamlike but still grounded, touching without being schmaltzy. So, yes, I will sum up again – if you get a chance, watch this film and smile.