Film - Voices of a Distant Star 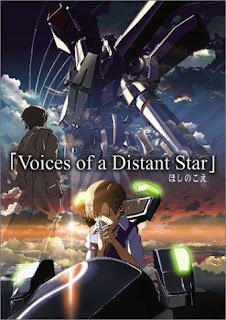 Liam Anthony is getting drawn into Anime and gives his thoughts on Voices of a Distant Star...

Voices of a Distant Star is a 2003 short animated film by director Makoto Shinkai, following the thoughts and feelings of Mikako Nagamin, school student turned space-mech pilot, and Noboru Terao, an old school friend and mutual love interest. Whilst Voices only lasts 25 minutes, it’s a film that uses this short time wisely to depict a sincere and emotional tale of these literal star-crossed lovers.

Set in 2046, man has discovered the ruins of an alien civilisation on Mars. Mikako and Noboru are two school students with developing feelings for one another, however, just as they are about to enter highschool, Mikako is recruited into the UN Space Army to join in on the war against the alien Tarsians. With Mikako in space and Noboru on earth, their only from of communication is through electronic mail. However, the further into space Mikako goes, the more time it takes for their mail to reach each other.

Despite the appearances of giant mechs fighting in space, this story is far from your typical Gundam Wing adventure, with the focus primarily on the hardships between Mikako and Noboru as they attempt to struggle through the most longest of long distance relationships. A lot of the story is told through monologues, taken from the main characters perspectives, as the two come to terms with just how long their messages will actually take to get to one another.

The art style is truly something. Anyone who knows anything about Makoto Shinkai knows that his art is something magical to behold, and whilst Voices is one of his first projects, you see this talent shining throughout, with special mention going to the scenery on the aliens planet Agartha (remember that name also, we’ll return to it another time).

The music throughout this short deserves special mention too, being beautifully poignant and developing the emotional depth of each and every scene. Tenmon produced the music in Voices, as well as many of Shinkai’s later projects too and, even if you’re not interested in taking the time to check out Voices, I urge you at least to listen to the soundtrack, as it can be an experience in of itself.

It’s about this place in this review that I’d like to take a moment to play a game. A game of my own making called the Shinkai Checklist. I’ve been a huge fan of Makoto Shinkai’s work for over 10 years, and in this time I’ve noticed some… Themes, which always seem present, so each time I review one of his films, I’ll return to this checklist and we’ll see which is included.

Yes, Voices of a Distant Star includes all of these themes. Perhaps it may seem like I’m cheating, intentionally only including ones that were present in Voices, but as we explore more of Shinkai’s work, you’ll see how eerily often these themes are included.

Before I wrap my thoughts up on this, I’ll tackle a pressing question which I’ll try to answer as truthfully in every one of these anime reviews… Dubs or Subs? It’s a question that needs to be asked, especially for anime, as the idea of watching a foreign film with English subtitles is enough to put someone off watching it all together and, when it’s a great story, that in itself can be a disservice.

Personally, I’d always go with subs. The subtitles on the official release are clear and easy to understand. The dub, however, I have some issues with. I don’t feel that the voices suit the characters very well, with Mikako’s voice actor feeling slightly awkward for the role, whilst Noboru’s seems too adult. If you are to watch Voices, I would highly recommend watching it subtitled, however, despite my issues with the dub, I still feel it relays the message of the film fairly well, so it’s worth checking out if you’re unsure subtitles are right for you.

But, overall, I cannot do anything but urge you to watch this amazing film. It’s still available to buy on DVD and Blu Ray, and even if you’re not a fan of traditional anime, you’ll be surely taken in by this masterful work of art.