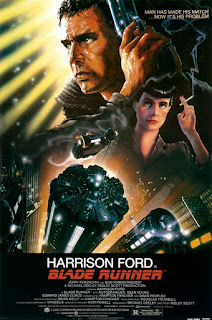 Our small band of Gunters here in The DreamCage universe are reviewing every film mentioned in Ernest Cline's Ready Player One. This week, Nate McKenzie dreams of electric sheep as he remembers Blade Runner...

It is so exciting to see how incredibly advanced our world is going to be in just two short years! Flying cars, bio-engineered snakes, and our very own androids!

Ok, those things might not happen (fingers crossed though) but at least we have, um... video calling? Enormous faces on giant billboards? Really good origami?

But hey, we still have Harrison Ford and, after the Grim Reaper tore through 2016 like a replicant through a torso, we can all be thankful for that. Here in 2017, we are also getting the sequel to the 1982 adaptation of Phillip K. Dick's Do Androids Dream of Electric Sheep? in which Ford will have a role alongside Ryan Gosling. That is something I wasn't looking forward to... until the trailer.

Now, it wasn't overwhelming, but the idea of taking a thought-provoking SciFi film like Blade Runner and furthering the story, with the help of current technology, does have me intrigued. After discovering that Denis Villineuve is directing (and Johan Johannsson is scoring the film) I am now fully on board with this sequel. Although, I will be a little skeptical about whatever advancements Blade Runner 2049 predicts will happen in the next 30 years. The movie, which comes out in October, will continue to be highly anticipated. Why? Because of the love and utter devotion that fans have for the original film. It is so revered and iconic that part of the narrative plays an important role in Ready Player One.

(No spoilers here. Read the book.)

I don't know how, but there are people who haven't seen Blade Runner. It's as if there are people in the world who don't spend almost every waking moment watching/reading about/obsessing over movies. (You make bad life decisions Kim!) But for the uninitiated, here's the gist:

Rick Decker (Ford) is a Blade Runner, an agent tasked with finding rogue replicants that have escaped an off-world colony and returned to Earth looking for their creator. Roy, Pris, Zhora, and Leon (Rutger Hauer, Daryl Hannah, Joanna Cassidy, and Brion James) are the replicants that Decker must track down while being effectively handled by Gaff (Edward James Olmos).

That premise alone could make for a decent, albeit shallow, Science Fiction movie. What makes Blade Runner so fundamentally great is the interactions and burgeoning friendship between Decker and Rachael (Sean Young). Rachael is the assistant to Dr. Eldon Tyrell, the creator of the escaped replicants and is the subject of a Voight-Kampff test administered by Decker; that test helps a Blade Runner determine if a subject is human or replicant. In fact, the test is based on real life Imitation Game proposed by Alan Turing as a way to measure machine intelligence.

Although Ridley Scott's proficiency as a SciFi director make the movie incredible to view, Dick's writing, the foundation beneath the surface, is the reason for the film having such a lasting impression. Moral and existential questions abound within the framework of the story. That is the beauty of Blade Runner: it serves as both a clever-but-not-too-clever futuristic cat-and-mouse movie, and a deep delve into the ethics behind incredible technology and the introspection that comes with that.

It's impressive to see how some of the visuals in Blade Runner stand the test of time. Not all, mind you, but many of the effects were accomplished using practical layering techniques that Ridley employed. Even though the CGI was rough in places, the movie is as impressive to look at as any from that era. Cyberpunk neo-noir owes a great deal to Dick's Do Androids Dream and Ridley's film version.

Blade Runner is an absolute classic - a lesson in mixing fun and high fantasy with challenging dilemmas stemming from something "more human than human".