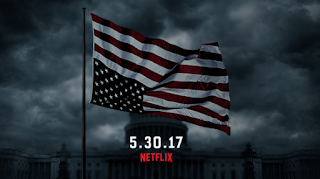 With all the US political coverage over the weekend, here's a Presidential announcement you may have missed...

Netflix have announced that Season 5 of House of Cards, starring Kevin Spacey as President Frank Underwood, will premiere on 30th May 2017.  And they announced it with a teaser trailer deliberately released to coincide with the real presidential inauguration ceremony.


We make the terror. pic.twitter.com/VpChwGOSMj
— House of Cards (@HouseofCards) January 20, 2017

Of course, when they were asked about the significance of the "terror" tweet and the trailer timing, they "Couldn't possibly comment..."