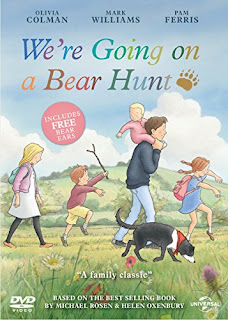 Shown on Channel 4 over Christmas, We're Going on a Bear Hunt is out on DVD next week. We got some Q & A's with the stars of the animation from Channel 4...

Based on the hit bedtime book, written by Michael Rosen and illustrated by Helen Oxenbury, and produced by the makers of the hugely-popular The Snowman and The Snowdog animation, We’re Going on a Bear Hunt follows the intrepid adventures of siblings Stan, Katie, Rosie, Max, the baby and Rufus the dog, who decide one day to go on an adventure in search of bears.

Coming up against a host of obstacles the family of siblings ventures through whirling snowstorms, thick oozing mud and dark forests on their ambitious quest. But when Rosie and Rufus become detached from the rest of the party it looks like bear-hunting might not be such fun after all... 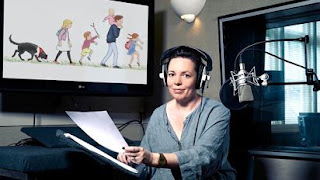 She’s a lovely, warm, loving mum that you’d like to have. A nice Mum.

What did you find appealing about this story?

What is it like doing a voice over like this compared to live-action acting on camera? How would you compare the two?

Comparing voice over to live action – I don’t know how to compare it really. One clearly is not being seen, which is quite nice, but you have to rely on your imagination rather than looking at another actor and working from them, so it’s different but equally satisfying I suppose.

Did you know this book before?

Yes, I knew the book We’re Going on a Bear Hunt. I read it to my older children. So it was quite a long time ago and always loved it. I loved the chanting that we always joined in with.

Well my youngest is too little at the moment, she’s still on earlier books. She will be enjoying it in the near future though.

What is their favorite part of the story?

As I recalled, their favourite part of the story was joining in with the sound effects and the chanting – sort of doing movements with the swishy grass.

Why do you think the book has been such a success?

I don’t know… If I could answer that I might have written a bestselling book myself. I think it’s an adventure that adults can remember from their childhood and kids are currently in that place where they can imagine things so clearly. I think it just struck a nerve with families young and old. Another wonderful aspect of it is that it’s so ‘outside’ - kids enjoying a natural adventure with their imaginations and fresh air and the wilderness. 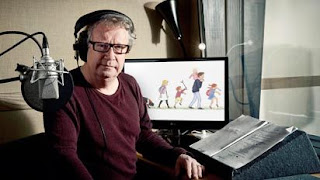 What was it like working with the We’re Going On A Bear Hunt team?

This team have been great; It’s such a lovely project. What’s really great is that Michael Rosen is in it and also [original book illustrator] Helen Oxenbury is very much involved. It’s so reassuring that what we’re doing is validated by the originators and it hasn’t been stolen from them! So that’s wonderful and it means that this film has a lovely, loveable atmosphere to it. I’ve just heard some of the kids’ voice work too which sounds fantastic. So I’m very excited. I read the script on the train yesterday for the second time and I started to cry. I said to my wife; “Do you want to read it?” and she said “No, I want to wait till it comes out.”

Tell us about your character.

He’s a loving Dad, and being a Dad is the best job in the world. Dad is with Mum and they have five children including a baby, plus Rufus the dog. I think it’s a bit of a confused household, he can’t find his keys et cetera – I think that’s mostly his problem. I think there is a case for saying there is something called Dad-Head which is when your family lives in your head like a swarm of bees. Mums are much better at just swatting the bees away but dads sometimes get a bit overwhelmed. He’s one of those dads. Technically in the plot of the film, what Dad does is leave the house, so that the kids are left alone and can go on the famous bear hunt. So it’s a very simple role - get rid of Dad who, with Mum, drives off to fetch Grandma, who’s stuck down the road because her car’s broken down. Then the bear hunt begins!

What do you find appealing about the story?

What is it like doing a voice over compared to live-action acting? Is there anything tough about it?

To be honest, it’s no different. I spend a lot of time doing voice work and you’re still very much in character. You use the same parts of your brain, the same emotions. I always find the most difficult lines are when you have to make noises and you always feel such an idiot. Well, I do! I’m asked: “Can you just, sort of, laugh a bit?” and you go: “Huh-huh-huh”. That’s when you become self-conscious… Everyone gets a bit self-conscious, otherwise you wouldn’t be human would you?

Did you know the book already?

I was always a big fan of Michael Rosen, especially his verse, which I don’t think gets the praise it deserves. It always makes me laugh. I do know We’re Going on Bear Hunt very well - who doesn’t, who can read? I imagine it’s responsible for teaching a lot children to enjoy reading because of the repetition. Who doesn’t want to shout “swishy swashy”? Also, my mum is an artist and has always been a big fan of British children’s book illustrators and I am a fan too. I love Edward Ardizzone [1900 –1979] and Helen Oxenbury because her pictures almost animate themselves, there’s always something going on. You’re always invited in to them; Kids come over and get involved, saying things like: “Look what the dog’s doing!” 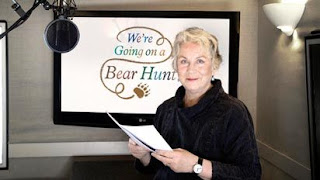 I play Grandma. Grandma’s role at the start of the adapted story is to take the children’s parents away from the house, leaving her grandchildren behind. And that is where the adventures - the bear hunt itself - can begin.

Grandma is a very warm-hearted person, she loves her daughter, her son-in-law and her grandchildren more than anything, but out of all of them Rosie is her particular favorite. We meet Grandma at a time where she’s had a very sad experience - her husband, the children’s grandad, has recently died. [This is not shown in the film, but gently implied.] She is not the kind of person who would expect everybody to be depressed with her. She lifts the atmosphere in the house by dancing and singing. She is a lovely woman. I’m very touched by the emotions that Grandma goes through, even in one line alone. She moves from being very sad to lifting everyone’s spirits and I find that kind of emotionally bravery very touching. I only have a few lines but I was in tears. I just hope the animators can bring that to life. I’m sure they will.

What is it like doing a voice-over part compared to live-action acting?

Acting in front of a microphone, as opposed to acting on a set with light, costume and everything, is the purest form of acting for me. It’s simply about the person - their feelings and their emotions. Everything else you leave to the animators so you’re free to just do that central job and I love it.

Why do you think the book has been such a success?

I understand from my young friends that one of the best things about this book is doing all the sound effects - the swishy swashies, the Hooo wooos and the squelch squerch. There is no substitute for joining in, and in this book children are allowed to join in, make the noises, be familiar with the story and help the story along. It’s a classic, it wouldn’t have lasted this long if it wasn’t so good.

What do you think will be appealing about this animation?

This is some of the finest animation I’ve ever come across; The quality of 2D animation, the richness of colour, the subtlety of the personalities that they draw. I’m very proud to be part of it.

We're Going on a Bear Hunt comes to DVD on 6th February.