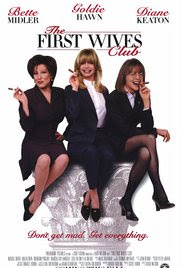 Steve Taylor-Bryant gets a taste of women's revenge (not for the first time) as he watches The First Wives Club...

There are only three ages for women in Hollywood - Babe, District Attorney and Driving Miss Daisy.

Date night. I love date night. It means I have time off from the dayjob, to begin with, and also means the million children I seem to have spawned over the years all leave me and their mother alone for a evening. Chinese is ordered and, as I am a very loving husband, I give my wife some choices for our entertainment. Bones? Supernatural Season 12? Eventually I suggest The West Wing as I still haven’t managed to get the wife to watch it yet, I’m a husband not a miracle worker, and so there we are with The First Lady, Mrs. Bartlet on the television screen jumping off a balcony because her husband left her for a younger lady. Wait! What? It appears that my bladder's insistence on leaving the room for a second meant that The First Wives Club started playing, apparently all on its own and without my wife touching the remote. Well played Mrs. Steve, well played.

Mrs. Bartlet, or Cynthia in this film (Stockard Channing,) really does jump off her penthouse balcony though, which is an event that brings old friends back together for the first time since college. Hollywood plastic surgery addict Elise (Goldie Hawn), herself battling with her husband's infidelity and her losing of younger roles to young models like Phoebe (Elizabeth Berkley), Brenda (Bette Midler,) the spurned wife of a successful businessman who has moved on to pastures younger in the form of Shelley (Sarah Jessica Parker), and Annie (Diane Keaton) who, at the start, firmly believes her marriage is saved before finding her husband is sleeping with their therapist Dr. Rosen (Marcia Gay Harden). After meeting at Cynthia’s funeral they rekindle their friendship and, despite some rocky moments, start a club, The First Wives Club, and vow to destroy their husbands as a team.

That’s pretty much the plot and honestly the reason why I haven’t watched this before with the wife, I have felt the wrath of a woman scorned and I don’t want mine getting a blueprint to my downfall. But it is incredibly funny, with Midler and Hawn reminding why we watched them so avidly in the comedies of the 1980’s, and Keaton I have never seen this funny – ever! She is just incredible, the neurotic little moments especially pleasing. The husbands are all the type you would expect and, quite rightly, we see their demise in financial and societal terms, there is no murder here, and the women inspire greatness as well as revenge. Come the end of the film my heart is warmed, my morals have had a lesson on where they need to stay and I have been truly entertained.

There is something nice about stepping out of your comfort zone to reignite your environment. Your favourite television show can be watched anytime and date night shouldn’t be a robotic response to a day off work or something you do because your calendar says you should. There are beautiful moments to be had by trying something different and, with The First Wives Club, I have had a great night laughing with my wife, we don’t do that enough. I have been reminded of stars that I used to enjoy and don’t watch enough of nowadays. I have played the ‘Guess the Cameo’ game with the likes of Bronson Pinchot, Phillip Bosco and Maggie Smith all making appearances. I have drunk wine and relaxed with good company and good non-violent storytelling and the world needs more of these nights as well as me. So, go through your DVD collection, search your streaming provider, find a title where the synopsis screams “this isn’t for me” and watch it. Chill out, enjoy a few hours... It might be all we have left.