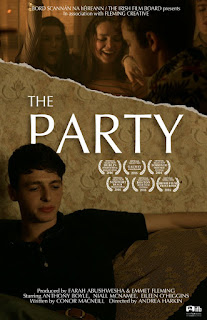 Susan Omand grabs a drink and joins the party as she watched the award nominated short film...

Belfast 1972. Laurence welcomes his cousin and man-on-the-run Mickey to a party of drinking, dancing and young love. By morning, reality catches up with them.


Wow. What a stunning wee film this is - no wonder it's been nominated for a BAFTA award. It’s only 15 minutes long but, by the end of it, I felt like I’d watched a full length feature film. That’s not to say it dragged, quite the opposite. There was so much in it, with several sideline story strands to capture the imagination as well as the main plot. The pacing was relentless too which made the pivotal event in the story, when it comes out of nowhere (no spoilers in case you ever get to see it), all the more shocking.

The writing, the first screenplay by Irish actor Conor MacNeill, showed that he has a real sense of events and how things were in Belfast at the time of The Troubles, even though the film is set 16 years before he was even born there. His characters were utterly engaging and I felt, as I watched the film, that I really wanted to know these people, to know the stories that led up to this point and what happened to them afterwards. The dialogue felt very true to life too, with a lot of sharp humour to help deal with the gritty reality and small touches that can only come from having observed an Irish family and group of friends as, even without the wonderful accent, you would have picked up on the time and place purely through the interactions. The atmosphere and changes of mood throughout the film were palpable with the abrupt shift between joy and worry from Mickey’s aunt, Laurence’s mother, an amazing thing to watch and the clouds of tension at the party, although never mentioned, were almost visible, thanks to the direction of Andrea Harkin. The acting by the mainly young cast was superb. It’s heartening to know that the film industry has such amazing talent as this ensemble coming up through its ranks. Special mention must be made of Anthony Boyle (Mickey) who managed to tread that fine line between family and outsider, innocent kid and cynical adult, joining in with the party but still remaining a step removed.

So was this the perfect short? Not quite. There were some bits of the plot that didn’t quite get explained or expanded enough and others that felt a bit rushed, understandable for a short film though. The premise was a meaty one to tackle in only 15 minutes and I would love to see the feature film that this short wants to be the prologue (of Laurence’s story) or epilogue (of Mickey’s story) for because there is so much more to tell for both these characters.