Gaming - Rise of the Machines

When you really need to know how gaming and gaming equipment have evolved over the years look no further than Steve Taylor-Bryant, who is old enough to remember when computers had tape recorders...


Computers for the masses, not the classes

Any excuse to write about the 1980's is snapped up in my corner of HQ even/especially when I am not asked. I have fond memories of a time when we had only three television channels, our films went in big black plastic cases and top loading VCR machines and telephones were used for actually making telephone calls, so the opportunity for me as a non-gamer to write about how gaming has evolved did leave a wry smile. This week a young friend of mine mentioned a time when games went on floppy discs, well, children, sit with me a while and let me take you back to a time when you had to plug in tape recorders and wait four days for a game to load.

In the early 1980's Steve Jobs et al had moved Apple out of his parents garage and the Apple and Apple ][ were showing the whole world the way forward in personal computing, but there was one company that managed to not only keep up with Apple but actually outsell them for most of the decade. This is where my computing experience kicked in - Commodore. The C= company produced gaming machines for the home taking advantage of the popularity of the arcade machine and my entry into the world of gaming was with the Commodore VIC20.

Auschwitz survivor Jack Tramiel had a knack for spotting trends and decided that with the proper investment his typewriter company could become a market force in the home computer. After having their fingers burned by Texas Instruments in the 1970's over pricing for Commodore calculators, Tramiel decided that outsourcing components was no longer viable and started to buy up small tech firms so anything Commodore could do in the future would be produced at a low cost in-house allowing for mass production and competitive pricing. The VIC 20 was released in 1981, I was six and in awe, and went on to be the first computer to sell one million units worldwide. Games like Pirate Cove Adventure, Matrix (no not that one), and Astro Nell were all bright colours and kept my sister and I entertained for hours. We had no concept of poor graphics, processor speed and the things you moan about now with your mobile phones, we just had COLOUR GAMES MAN!

We moved to Germany the year after and my Father was promoted from Sergeant to Chief Tech in his Air Force job which brought with it a massive pay rise and a new computer as apology to us kids for moving to the other side of the world and abandoning our friends. The Commodore 64. Synthesised music, better graphics, superb sound, cartridges, cassettes, and floppy discs, I really was the envy of my friends. The C= 64 was possibly the most popular computer ever produced and sold over thirty million units in about ten years. The faster tech (no I don’t understand it) made for awesome game play and titles like IK+, Turrican, Impossible Mission, and Project Firestart opened my eyes to endless gaming opportunities and years of thinking that things would never be any better until... 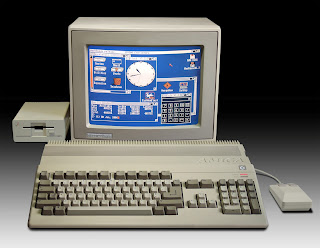 OMG!!! The Amiga 500, calm down Steve you have an article to finish. You could change the screen resolution depending on whether you were playing on a television screen or were posh enough to own Amiga's own monitor, which was night and day much like the difference between the old hand tuned TV's and High Definition flat screens. A palette of over four thousand colours, digital sound, and multiple joystick ports meant gaming for me was more inclusive as I could have friends round and play tournaments, show off and basically be the centre of attention (until they all went and bought games consoles and I bought a BMX). Worms, the rise of the celebrity endorsement with Jimmy White's Whirlwind Snooker, Lemmings (my sister’s favourite all time game), Alien Breed and Sensible Soccer are still played the world over now and in my opinion are more superior than any game you can get on your phones now, which when you consider these games are two decades or so old that’s quite a feat!

Gaming has moved on a lot in more recent years and whilst I know the Playstation 4 is far better than the Playstation 3 I don’t think you’ll ever see such rapid advancements as Commodore made in the golden era. To take one block on screen and, in less than a decade, have a 3D mini movie of a game is evolution at its best.