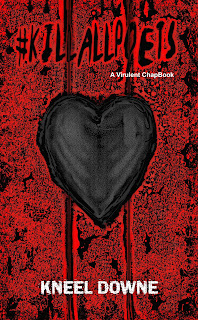 Marc Nash catches the VirulentBlurb in rhythm and meter as he reads #KillAllPoets, the latest poetry ChapBook from Kneel Downe...

I’m a writer but I’m not a poet. Never really got on with the compression involved in poetry, as my preference is for opening out words and meanings. Maybe that’s why The DreamCage asked me to review a poetry collection chapbook called #KillAllPoets. I like words to breathe and soar, but Kneel Downe takes words and pulls their heads off like Ozzy Osborne does with bats. Yet there is nothing compressed about these poems. The sentiment and imagery is pretty damn clear.

In "Our City", every line is a self-contained indictment on the alienating, atomising nature of our likely urban futures. Packed together yet irrevocably cut off from one another. Kneel offers that artists and musicians like the writer Jeff Noon & bands like Black Sabbath warned us of all this, but that they too were harmlessly absorbed into the all-consuming neon urban landscape. The only couplet not self-contained concerns death omen “Ravens reaching feed enlightenment”, a deliciously ambiguous image of ravens feasting on human flesh, gaining their enlightenment at the expense of us humans, because they are instinctive creatures while we have to embellish & adorn everything about our lives. And now channelling endless 6th Form English Lit lessons from my past, the opening line “Binary boys swapping digit dialogue” employs two alliterations to set off the pumping rhythm of this poem. Yet to an old timer like me, ‘digit dialogue’ is both online communication, but also the hand salutations of fist bumps, high fives & giving some skin of those who used to inhabit street corners. Nostalgia for street gangs… This poem is twinned with another searing indictment of the modern cityscape in "Unfurled", with again a musical link as the only way forward offered out of this soul-numbing morass.

In "the Bone Tree" all the nouns are capitalised as in the German language and this lends it a certain sense of Gothic antiquity, this hateful, vengeful tree has been around since the dawn of time and now patrols at the end of time to claim its nourishment. A nourishment derived from “Regret and Failure”, not its own, but that of man, with “Flesh to Burn & Blood to Spill”.

"Bad Light" stopped play, but this poem just ain’t cricket. It’s a nice play on words, for the play that has been stopped is the theatre, the masquerade farce that is our lives. Yeah, there’s not a lot of light shining through this collection, but then you wouldn’t expect that of Kneel Downe right? Having said that the poem “Buttons” has a certain light, capering tone, but the buttons in question are those sewn in for eyes on dolls, which is also to say on us flesh and blood beings for all that we see out of our glass bead eyes. "Cylons in Nylon" does offer a chink of relief, but it still invokes a contest between shades and gods for your soul. In "Drive" Dr Seuss is juxtaposed with voodoo dolls, you get the landscape we’re dealing with here right?

I think my favourite is "Dreaming of" where all manner of entities wish they were something other than they are, such as “Tower Blocks dreaming of being mountains”. This had such a simple, aching profundity to it, I was deeply moved.

There were a couple of poems that I felt I needed them in their original context (all these poems have appeared elsewhere in publications from the Virulent Blurb world), to get the full appreciation of them, but there are so many poems in here that transcend their original context to work amazingly powerfully in their own right here. The poem "Sing"’s crushing avowal in its final line “Words beyond their sell by date” is both a judgement on where we currently sit, but also a demand to find better words to rouse and inspire us. This collection is a pretty bloody fair start on that particular campaign. Kids, over to you.