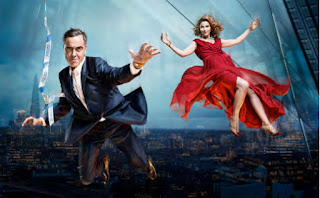 Ahead of the new series of Stan Lee's Lucky Man on Friday 24th February 9pm, Sky have released an interview with the lucky man himself, James Nesbitt...

Series one of Stan Lee’s Lucky Man introduced London-based murder detective DI Harry Clayton (James Nesbitt), who after a chance meeting with the mysterious Eve (Sienna Guillory), is given an ancient bracelet that seems to bestow upon the wearer the ability to control luck. But Harry receives the warning that with every piece of good luck, there is misfortune waiting around the corner.

Other returning cast include Eve Best, Amara Karan, Steven Mackintosh and Darren Boyd. Joining series two is Dutch actress Thekla Reuten as Isabella, a mysterious temptress who has more than a passing interest in DI Harry Clayton and the ancient bracelet that appears to bestow him with good fortune. Series two opens on a high-speed car chase through the streets of London with DI Harry Clayton at the wheel. Still wearing the ancient bracelet, he now refuses to use his new found ‘power’ to assist him in any way, mindful of the dire consequences.

With London bright and bold as the cinematic backdrop, each week Harry and the Murder Investigation Squad are called upon to solve particularly puzzling murder cases across the capital. Teamed with his partner, DS Suri Chohan (Amara Karan) and having been accepted back into the fold by his boss, Detective Superintendent Winter (Steven Mackintosh), Harry continues his struggle to come to terms with his gambling addiction while proving to both his wife Anna (Eve Best) and his daughter Daisy (Leilah De Meza) that he can stay straight and win back their trust.

Harry’s chance meeting with the enigmatic and alluring Isabella Augustin (Thekla Reuten) throws everything he thought he knew about the bracelet into turmoil. She enters his life with a seemingly identical bracelet on her wrist. As Harry’s will is tested, his state of mind begins to fray as the stakes rise and the race against evil draws ever closer.

Here's the interview with James Nesbitt.

Who is DI Harry Clayton?

DI Harry Clayton is a cop working for the London police force. He is a father, a husband, a gambling addict; he is someone who is on the right side of the law but often skates on very thin ice when it comes to his methods of achieving his goals. As a result of his gambling addiction, he has lost his wife and their house, so he is separated, isolated and a flawed character, but ultimately trying to do good.

How has Harry grown from series to series?

A lot happened at the end of series one with the use of the bracelet almost costing him the lives of his wife and daughter. When we meet Harry in series two, even though he can’t get rid of the bracelet, he’s trying to walk the right path and not use it. What he has been told in the past by Eve is that for every piece of good luck that comes his way, bad luck can befall someone close to him. Harry is on his own but he is trying to be a good father and separated husband, and he is trying to live to the letter of the law by not using the bracelet.

Has his relationship with Anna and Daisy changed?

Although Anna (Eve Best) loves Harry deeply and he loves her in return, Anna believes that they cannot get back together. Every time they get close, Harry seems to do something that pushes her away. Anna has her own life to get on with but Harry is everpresent. As the series progresses his daughter Daisy (played by Leilah De Meza), begins to think that maybe there is something magical about her father and the bracelet that he wears. Their family unit is a complicated and painful story but it is underpinned with love. Harry and Suri’s relationship took a bit of a beating in series one.

How would you describe Harry’s relationship with her in series two? Is there still trust there?

The relationship between Harry and Suri (played by Amara Karan) is a complex one. He taught her everything she knows and she looks up to him. She is in a funny way his yin to her yang. Harry being the maverick, occasionally doing whatever it takes to bring the criminal to justice, bristles against Suri’s by the book attitude. As you will see in series two, this sometimes creates a wedge between them.

Does Harry treat the bracelet any differently in series two?

Harry is trying to get on with his life, the bracelet is there but it is sort of in the background, it’s ever present but he is trying not to use it. In episode one of this series he encounters the extraordinary Isabella, she herself has a similar bracelet and this throws Harry into a spiral of uncertainty and doubt. Everything he knew of the bracelet now seems untrue, thinking that he was the only one with this unusual power. Isabella tries to get Harry to see the bracelet in a different light, to see its potential. That is why I think this series is exciting with the notion of good and evil and the arrival of Isabella throwing Harry into a spin. He has to work out who she is and if she is a force for good. All that, adding into the mix the notion of this superpower, series two seems even more aligned to Stan Lee’s original vision of the mystery surrounding luck.

What is Isabella to Harry? Can she be trusted?

The character of Isabella is a very exciting addition to the series. To Harry she is very attractive and alluring; she lives life in the moment, but has had her own share of pain which Harry can identify with. There is this notion that together they can achieve great things, but as the series develops we begin to see glimpses of Isabella’s real character that will prove an issue for Harry. So that journey and relationship is new for series two and becomes one of the most important relationships of the Lucky Man series.

Lucky Man is a London-centric show, what have been your favourite locations on this series to film?

One of the most defining things about Lucky Man, more than any other show, is that it features London in a way that it has never really been seen before. The access we have had to some of the most iconic locations in London is second to none. In the first series you have Harry in a speedboat going through the Thames Barrier at three o’clock in the morning, we filmed at the foot of Tower Bridge, inside the British Museum, the Tate Gallery and all over the capital. In this series it gets even better. We shot car chases in Canary Wharf, scenes by the fountains at Somerset House and managed to shoot at rush hour in Piccadilly Circus by the Statue of Eros for an incredibly important moment. Another wonderful experience was shooting at the National Gallery. We had private access and it was extraordinary to film a scene with Thekla, surrounded by great works of art all around us. It really is part of the fabric of the show that gives it a feel that you are involved in something really exciting and innovative, something very special.

What do you think viewers like about Harry as a character?

I think what is interesting about Harry Clayton is that he is human, flawed, he is in many ways isolated. There are aspects of Harry’s character that we’d aspire to and there are those that we don’t. Right is on his side but he is a bit world-beaten as he’s had his share of pain and loss, but what is courageous about him is that he gets up in the morning and goes to work to face it all again. He is flawed and audiences can relate to that more than a perfect character. He is imperfect, but is a trier and I think audiences like a trier.

What was your favourite Harry Clayton moment of series one?

There were so many but the action scenes have been my favourite, particularly being able to ride a speedboat through the Thames Barrier. To film all over London has been fantastic and to get to see parts of London that I had never seen before, Lucky Man takes you everywhere. It’s also been a fantastic opportunity to work with Stan Lee. He is across every script and well aware of all that we are doing which is just the most incredible feeling.

What would you like the audience to take away after watching an episode of Lucky Man?

I think what an audience will take away with them is a high-octane sense of adventure, danger, intrigue and mystery with stunts and car chases but also seeing real relationships unfold. I think it is a real cocktail of all those things. I hope that by the time you reach the end of the series you will be left quite breathless.