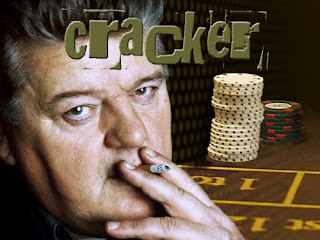 
1993 was a game changer for me. I had a full time career, was nearly married to the ex-wife, and funny people started being serious and I found I liked it. Cracker. Robbie Coltrane, he of comedy sketch shows and Nuns on the Run fame, became my idol. I instantly wanted to change career, I already smoked and drank like him anyway, and I wanted to watch television so much more than I did. 1993 and Cracker is where my general love of screen media became an obsession that lasts till this day. Let’s go back and take a look at why, a psychological look if you like. No, actually let’s not open that can of worms, let’s instead just remember when, for a short while, television became genius.

To help with cases that the police are genuinely baffled by, or getting nowhere with, they often bring in some kind of psychological helper. This is nothing new. Bringing in an alcoholic, gambling addicted, almost madman of a psychological expert however is new territory. Make that gambling drunk one of the nation’s most beloved comedy actors as well? That’s surely never going to work. That however is where the beauty lies in Cracker and, don’t get me wrong, there is very little that is beautiful in this show. The stories were so dark and twisted, the crimes so heinous, the casting of the police, and especially the criminals, so good, the writing so encapsulating, that the pressure to get the title character cast right must have been immense. You need a guy that can play anger, wit, depth, cleverness. You need a guy that share screen time with Christopher Eccleston and Lorcan Cranitch and not look out of place. You need a guy who could be tempting as a lover for the wonderful Geraldine Somerville. You need a guy that can bore so deeply into Robert Carlyle’s psychotic villain he can understand him. Yes my mind instantly thinks of Robbie Coltrane as well… Who on earth thought of Coltrane for Fitz? Honestly if I had a time machine and could do anything, I’m going back to be a fly on the wall during that conversation!

“I need someone to … Eccleston… blah, blah”

“Ooh boss how about that slightly large comedian from Nuns on the Run?”

“No wait boss, think about it…”

A statement of fact before I continue. Jimmy McGovern’s writing was so good in Cracker that honestly whoever was cast would have been highly watchable BUT the casting of Robbie Coltrane was against type and, my apologies to Mr. Coltrane for this, so against the talent that had been showed previously that it took what would have been great television and made it epic, made it last long into my adult years, made it almost iconic. Can you now honestly sit here and think of someone that could have played Fitz better? No, you can’t. The casting of Coltrane raised the bar for television shows. Gone were the days where I could just sit and watch any old programme, they now all had to be bigger and better. Could a posh English comic like Hugh Laurie get an audition to play House if Cracker had bombed? I genuinely don’t think so. That is Cracker in a nutshell. It didn’t just produce its own level of genius in television, it affected every show since. It made casting choices less mundane and more adventurous, it made writers think more about the characters they were producing, and it made networks seriously look at every possible decision before e a show got the greenlight.

Cracker isn’t just my favourite television show produced by a British network because it was flawless in its own production, it is my favourite because it changed the game. 1993 was the year British television woke up and showed the world that brave decisions backed by great writing was the way forward. Cracker changed television. Bless you, you chain smoking, alcoholic, gambling nutjob of a man.