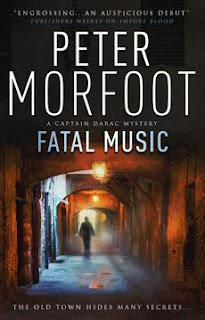 Uncover the dark underbelly of Nice with Fatal Music, the second book in the astounding Captain Darac mystery series by Peter Morfoot. Dripping with unease and dark humour, fans of Michael Dibdin and Andrea Camilleri will devour this gripping tale of greed, treachery and deception.

Captain Paul Darac of the Brigade Criminelle is called to a potential crime scene - an elderly woman found dead in her hot tub. At first it's assumed that she died of natural causes, but a surprising link with Darac's own life leads him to dig deeper. In doing so he uncovers disturbing proof that there may have been a motive to murder the woman, and there is no shortage of suspects. The investigation leads him from the world of fine art to the desperate poverty of the city's high-rises. But it is among the winding streets of his own neighbourhood in Nice s old town, the Babazouk, that Darac faces his severest test yet.

Peter Morfoot has written a number of plays and sketch shows for BBC radio and TV and is the author of the acclaimed satirical novel, Burksey. He has lectured in film, holds a PhD in Art History, and has spent thirty years exploring the life, art and restaurant tables of the French Riviera, the setting for his series of crime novels featuring Captain Paul Darac of Nice’s Brigade Criminelle. He lives in Cambridge.