Doctor Who – The Highlanders 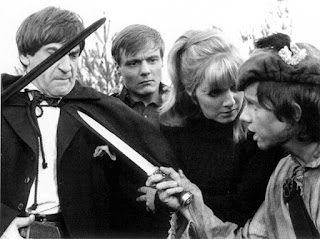 Our Doctor Who expert, Tony Cross, is journeying through all of time and space to bring us his thoughts on every available Doctor story. Today is the Second Doctor adventure The Highlanders...


The Highlanders, directed by Hugh David is the last historical story in Doctor Who until... arguably... Black Orchid. Written by Elwyn Jones and Gerry Davis it follows the Donald Cotton model as it mixes some quite broad comedy with moments of threat, although unlike either The Myth Makers or The Gunfighters it doesn't suddenly take a massive tonal turn to the dark side as it reaches its conclusion.

Also, unlike The Massacre, it hints at the horror of its setting. Culloden was a brief and bloody battle. It lasted less than an hour and between 1,500 and 2,000 Jacobites were killed. The Duke of Cumberland followed up by putting the wounded to death over the following days. It wasn't pleasant, which is alluded to throughout The Highlanders but overall the tone of this story is lighter than its subject matter suggests. After all, it is rare for defeat, murder, slavery and cultural destruction to be treated like this. But then this is Doctor Who. And just as it would be impossible for Doctor Who to deal with the Holocaust directly, it is impossible for it to deal with the consequences of one of the last major battles on British soil.

This is Troughton's second story and he finds excuses to dress up and disguise himself often: as a Hannoverian Doctor called von Wer, allowing for another trot out of the Doctor Who joke and possible proof that the Doctor's name is really Doctor Who; as a washerwoman and as a British soldier. He's also obsessed with hats. But he's a delight to watch. The scene where he puts Solicitor Grey (David Garth) in the cupboard and then proceeds to bamboozle Perkins (Sydney Arnold) is a joy.

Polly actually annoys me a tad at points in this story. She's snobbishly rude to Kirsty (Hannah Gordon), which feels a bit unnecessary. Ben gets to be heroic and English, which means he's constantly threatened by all and sundry. Both of them are rather stupid at the beginning of this story demanding to go and take a look around thinking it 'might be Britain' even after a cannonball thuds into the ground nearby and there is the distant sound of gunfire.

This story also introduces us to Jamie McCrimmon (Frazer Hines). Apparently, it was a last minute decision to make Jamie a companion but he joins the team at the end of this story and will end up staying with the Second Doctor all the way through his era. He's good in this: a fine combination of youthful bluster and feisty questioning.

Basically, the TARDIS team blunders into the end of the Battle of Culloden. They're captured by fleeing highlanders, then (after a moment of Ben stupidity) are captured by English soldiers and about to be hung when Solicitor Grey and his clerk, Perkins, turn up and demand the prisoners be marched to Inverness.

Solicitor Grey, a dried up greedy git, is making cash by sending Jacobite prisoners to the West Indies as slaves, which he isn't supposed to be doing. He's in cahoots with Captain Trask (Dallas Cavell) of the 'The Annabelle'. Trask is from the Treasure Island school of seamanship and could have slipped out of The Smugglers.

Polly and Kirsty having been separated from the others then get involved comically with Lt Algernon Ffinch (Michael Elwyn). Lt Ffinch would be referred to as a 'Rupert' in modern British Army parlence. A posh officer who isn't necessarily the brightest spark but has the right upbringing. Polly and Kirsty capture him, steal his money and blackmail him to help them, although in the end...ah...well...that would be spoiling things.

Everyone ends up captured, then escaping and then helping other people escape whilst unravelling Solicitor Grey's plans.

The Highlanders is fun, light-weight (which is odd considering the ugliness of the history that is going on around it) and speeds by. Yes, there's possibly one too many Troughton disguises. Yes, Polly is a bit of a snob but overall this is worth a watch (via Reconstruction obviously as it doesn't exist in the archive.) It's does however cleanse the palate after the dark and devious The Power of the Daleks.