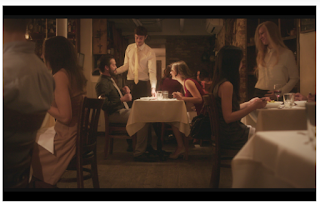 Short film Check Please has been selected to run on Short of the Week next week...

In a fancy restaurant, Ben plans to propose to his long time girlfriend, Laura, only to find out that his ring was mistakenly sent to the wrong table.


Director Daniel Sorochki’s latest film Check Please, which stars Matthew Porter (30 Rock), alongside Bryan Manley Davis, Jacob Trussell, Amelia Brain and Emily Dennis, has been collecting accolades for Best Film and Sorochkin for Directing and Screen Writing. Having garnered awards during the films festival run, it has now been selected to play on the Short of the Week website, a curated site run by film makers for film makers and who have been serving up epic, bite-sized films to millions around the world for the last ten years.

Daniel Sorochkin grew up in Israel, his journey of filmmaking started in a military unit in the IDF, where he wrote and directed several acclaimed comedic films. After his service Daniel moved to the US to study filmmaking at NYU Tisch School of the Arts and it wasn’t long before his work began winning awards. His latest work includes: Check Please, Shady Pines, a comedic TV pilot about a crazy nursing home and Lola and Dallas, a short narrative mystery-drama.

This comedy is produced by Reut Eliemelech as well as Helena Emmanuel and edited by Yonatan Weinstein. The director of photography Oren Soffer was nominated for the ASC Gordon Willis Student Heritage Award, and was a finalist for the Arri Volker Bahnemann Award for Cinematography.

Check Please will play on Short of the Week from Monday 27th March. Watch the trailer: