Ventspleen delves into the slightly odd world of Edgar Wright as he tackles all three flavours of Cornettos in one night...

All three films in one night? Are you mad? Well, yes, quite possibly, but they make up the awesome trilogy that has come to be known as The Three Flavours Cornetto Trilogy or sometimes just The Cornetto Trilogy. The name started as a silly joke during the promotion of Hot Fuzz. An interviewer drew attention to the mention of Cornettos in Shaun of the Dead and Hot Fuzz. Wright jokingly replied stating it was comparable to Krzysztof Kieślowski's Three Colours film trilogy and so a legend in film history was born. Amazingly, Wright wrote the final part, The Worlds End, primarily to complete this popular ice cream based trilogy. Each film features a different flavour. In Shaun of the Dead we see Shaun buying a strawberry Cornetto (representing the blood and gory scenes of the film) Hot Fuzz features Nicolas Angel and Danny Butterman purchasing a blue wrappered "original" Cornetto (signifying the police themes of the film) whilst Worlds End has a mint green wrapper wafting past in one scene (the sci fi or alien themes). Mad, totally bloody bonkers! Yet also totally brilliant. 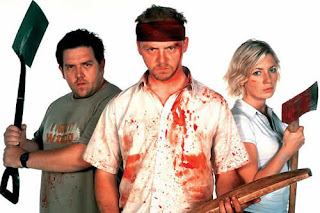 Shaun of the Dead is one of my favourite zombie films in that it achieves the titanic task of perfectly encompassing horror and comedy. Anyone who has had to endure the pathetic Scary Movie sequels will know that this can go horribly wrong very easily. The combination of Wright's punchy and witty dialogue and the ensemble cast (Simon Pegg, Nick Frost and a brilliantly cast Bill Nighy amongst them) make for a film that became an instant cult classic. Take your pick for favourite and memorable moments. Whether it's the hilarious White Lines cover featuring a guest appearance from a zombie, the beating to "death" of the zombiefied landlord to the strains of Queen's "Don't Stop Me Now" or just simply the sparkly and profanity laced interplay between Frost and Pegg there really isn't anything to dislike. It probably helps that Wright, Pegg, Frost and producer Nira Park had worked together previously on Spaced. Their knowledge and awareness of each others' abilities is clear to see. Pegg, himself, is well known to be a huge zombie film fan and all the crucial elements are here including body ripping and entrails (you gotta have entrails.) 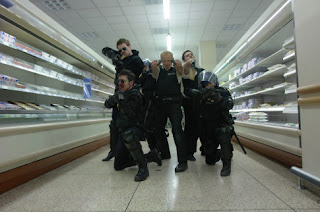 How do you top a film so mind blastingly well executed as Shaun of the Dead. Well you don't! Wright's trilogy crosses genres and Hot Fuzz isn't really a horror film, OK it is but it's also a Police crime thriller. Nicholas Angel's religious dedication to the police force is something to behold! I absolutely love his scenes with Danny Butterman in which he tries painfully to explain what proper policing is about. Danny's response? "I think you would have made a great Muppet." Aside from the humour and fantastic death sequences, the film is owned by Timothy Dalton, for me anyway. Dalton is stunning as "slasher..... of prices" Simon "this really hurts" Skinner. For many, Hot Fuzz is the firm favourite of the three films and one can easily see why. It just doesn't drop pace or waste a single line of dialogue, not for a second. I have to admit that whenever its on television I'll always sit down and watch it, even though I've got all three films on bluray. Well you have to don't you? It's live! Certainly Hot Fuzz' (Fuzz's? Fuzzes??) popularity showed at the box office. Its world wide takings were more than the other two films added together. 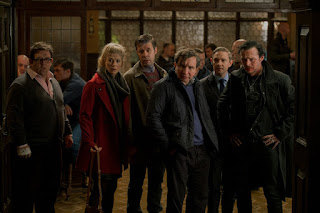 The Worlds End, or Wrights idea of "let's have the heroes of the film totally hammered" concludes the trilogy and I'm usually quite wobbly by this stage myself both due to alcohol and the sheer volume of quotable lines. I love the sci fi themes of body snatchers with more than a nod at Stepford Wives and John Christopher. Pegg's character Gary King is likeable but desperate and, wow, can't they all drink. Well all except Martin Freeman! For me though, this is a trip down a drunken memory lane. The soundtrack is all 90's! just hearing Primal Scream's Loaded or Happy Mondays "step on" makes me go all misty eyed. Bill Nighy is totally awesome as the voice of The Network and the banter between King and The Network is pure comedy gold. This then is essentially a monumental pub crawl with an anarchic Sci Fi wrench that sends it in a direction that inspires the case to more lunacy.