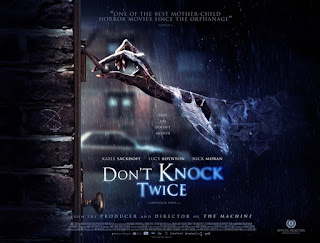 Coming to UK Cinemas from 31st March 2017, Ren Zelen didn't have to knock twice to get in to see Don't Knock Twice at Raindance Film Festival last year...

Genre favourite Katee Sackhoff (Oculus, Riddick, Battlestar Galactica) plays Jess, an American sculptor who returns to the UK where she spent much of her youth. Jess is a guilt-ridden mother who is desperate to reconnect with her estranged teen daughter Chloe (Lucy Boynton) who she was forced to place into care many years ago while she recovered from drug addiction problems.

Cold and resentful, Chloe initially rejects her birth-mother’s conciliatory pleas. However, having nowhere else to go, she hurriedly changes her mind and agrees to move in and stay with Jess and her new husband (Javier Botet) after she fears that she may have initiated the operation of a legendary curse.

Chloe is now convinced that she is being hunted by a murderous witch who was behind several child abductions in the past and is responsible for the recent disappearance of her boyfriend Danny (Jordan Bolger) after he dared to fulfil the conditions inherent in prompting the curse.

However, because of Chloe’s troubled past and her mother Jess’s medical history of addiction, no-one will believe their story of being pursued by a supernatural entity bent on vengeance. Determined to save her estranged daughter, Jess has to rely on her own resources and courage to uncover the terrifying truth behind the urban legend of the demonic witch. But, is the urban legend real, or are Jess and Chloe being manipulated by another individual with their own agenda? 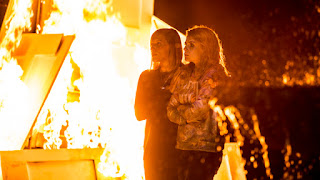 Urban legends spread like psychological viruses because they tap into some our deepest fears, one of which involves the call for help that is disbelieved, laughed at, or ignored by others. Another dread is of the vengeance of the wrongly accused. Just as urban legends are based on our innermost fears, so certain locations are traditional triggers which embody unease– such as the empty and derelict house after dark, or the underground lair that holds secret horrors.

Don’t Knock Twice does not balk from utilising all these prompts to construct a twisted urban legend which is a combination of old Eastern European fairy stories and urban myths in the vein of Candyman. Urban myths themselves may be seen as the modern counterpart of ancient folk tales - they spread in the same way and depend on how many people are intrigued enough to pass them on.

In Don’t Knock Twice, Katee Sackhoff again has another stab (if you’ll excuse the expression) at playing the distraught mother, as she did in Oculus, but this time fixated on protecting her only child from harm. Luckily she has rather more to work with here and makes the most of what she has. Director Caradog James worked from a script by Emmy-nominated writing duo Mark Huckerby and Nick Ostler (who also penned Paul Hyett’s stylish werewolf romp Howl).

Just as in all urban legends, elements of the movie’s plot may not always hold up too convincingly. However, Don’t Knock Twice remains a suitably chilling supernatural thriller with some high concept scares and a sinister final twist.