Film - The Eyes of My Mother 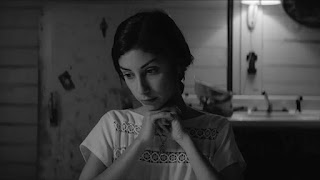 Ren Zelen looked into The Eyes of My Mother, in UK cinemas 24th March ...

In The Eyes of My Mother director and writer Nicolas Pesce offers a disturbing examination of serious emotional dysfunction and disorientation.

We meet a little girl named Francisca (Olivia Bond) who lives on an isolated farm with her mother and father. She is unfazed by death from this early age because her mother, formerly a surgeon in Portugal, is educating her in a dispassionate and thorough understanding of human anatomy.

During the opening scenes, little Francisca is home alone with her mother, when they are ambushed by a grinning lunatic (Will Brill) and a brutal, purposeless act of violence occurs.

Caught in the act by the father who returns from work, the murderous lunatic is overpowered and chained up in the barn. Francisca goes to visit the prisoner and placidly asks him why he kills – he answers, ‘because it feels great’. The little girl hits on a grotesque method of ‘taming’ him, and then adopts the killer as a pet.

This childhood trauma results in reinforcing some disturbing habits and curiosities. Years pass and Francisca, now a young woman (played by Kika Magalhaes) has cultivated desires which take a distinctly dark form. The story unfolds in an entirely unpredictable way, a phenomenon distinctly unusual in modern horror movies. Pesce never feels the need to explain his characters or their bizarre actions – they are what they are, Pesce never explains why.

When her father passes away of natural causes, we are treated to the image of the distraught and lonely Francisca joining her father’s corpse in the bathtub while pleading for him to wake up. Refusing to bury the corpse she prefers to prop it up in various domestic scenes. Communing constantly with the ghosts of her dead parents and having only her ‘pet’ to look after, Francisca’s loneliness causes her to become increasingly deranged.

The film is shot entirely in lavish black and white photography and this may be one of its strengths. Cinematographer Zach Kuperstein takes advantage of chiaroscuro with scenes lit only by lamplight, creating an eerie sense of shadow.

The displays of cruelty and suffering are broken down to their essentials in a setting disquieting enough so that we don’t need the vivid visuals of blood or gore to make us shudder. One extraordinary scene involving an attempted escape is viewed through a window and lit by moonlight. This generates a more ominous quality than any gory closeup could.

Much of the worst of the violence remains off-screen. Instead of cheap jump scares or explicit gore Pesce prefers to tap into the viewers’ imagination, and sound mixer Patrick Burgess enhances the nightmarish effect by vivid aural prompts such as guttural noises, chains dragging across wooden floors and the sound of the knives repeatedly plunging or slashing.

With a running time of only seventy-seven minutes, Pesce wastes little time in bringing on the horror. Although The Eyes of My Mother has a finale which arrives too abruptly to merit the suspense leading up to it, Pesce and Kuperstein manage to evoke European cinema, bringing to mind the work of Lars Von Trier and Pedro Almodovar, within a Tobe Hooper-like setting.

As viewers, the film forces us to maintain an uncomfortable degree of intimacy with its central character. Francesca’s motives seem as inexplicable to her as to the people she encounters. She horrifies but also invokes pity - a character that has no grip on reality, and possibly never had. She struggles to comprehend that the dead remain dead, that people have harmless ways of making friends and that some people are simply insane or evil.

Francisca may be a homicidal killer, but that doesn’t stop the director from making us reside in her psychological disfunction. At once pathetic and terrifying, Francisca is a unique, startling and unsettling movie monster.

THE EYES OF MY MOTHER is in UK cinemas 24th March