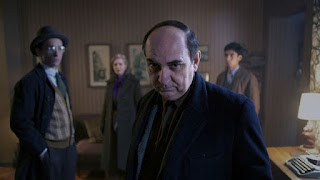 Out on DVD now, Susan Omand sought out the poetry of politicians as she watched Neruda thanks to last year's London Film Festival...

At first glance this may be an odd film choice for me but there were three things that piqued my interest and made me want to give it a try: Poetry (the words of the revolutionary Neruda), Politics (the Cold War and the rise of Communism in Latin America) and Peluchonneau who, in this film, is played by the sublime Gael García Bernal, whose acting I became a huge fan of with the Amazon series Mozart in the Jungle, so I wanted to see what he could do in a longer form setting.

It’s 1948 and the Cold War has reached Chile. In congress, Senator Pablo Neruda accuses the government of betrayal and is swiftly impeached by President Videla. Police Prefect Óscar Peluchonneau is assigned to arrest the poet. Neruda tries to flee the country with his wife Delia del Carril, but they are forced into hiding. In the struggle with his nemesis Peluchonneau, Neruda sees an opportunity to reinvent himself. He plays with the Prefect, leaving clues designed to make their game of cat-and-mouse more dangerous, more intimate. In this story of persecution, Neruda recognises his own heroic possibilities: a chance to become both a symbol for liberty and a literary legend.

The first thing I’d say is don’t infer too much from the marketing that says this is a detective thriller. This isn’t an all action, high suspense, edge of your seat, full of explosions type adventure – it’s a lot more subtle than that. The official synopsis above, based on true events, is basically the whole story of the film. Pablo Neruda, poet and politician, gets impeached by the president for being a Communist and evades capture from the tenacious police inspector, basically by going into hiding in various party supporters’ houses and establishments and tormenting him by leaving books along the trail for him to find.

So what do you get from the film if it’s a bit short on excitement and adventure? You get a literally beautiful film. The costumes, locations and colours perfectly evoke the era and the atmosphere in a very intimate and seductive Latin American way and the cinematography and lighting, complete with lens flare used properly, is utterly stunning. There are tiny touches too, whether intentional or not, like having the senate shadowed in a blue-ish tinge to contrast with the implied redness of the Communists. 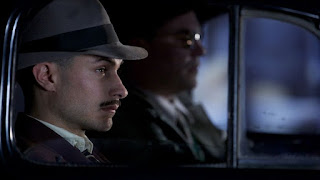 The writing too is beautiful, not just the poetry quoted by Neruda, but there are some stunning turns of phrase by screenwriter Guillermo Calderón that made me catch my breath and rewind so I could hear and read them again. Yes, read, because this is a subtitled film but in this case that is a fantastic thing because you get the nuance and rhythm of the words spoken in their native language as well as the understanding of the words in the English subtitles. There is also a remarkable dry, cynical but not overt, humour in the film, both visually, like when Neruda “hides” in a photographer’s shop by being a face in a frame at the window or when the Inspector keeps finding the trail of books being left for him, as well as in the interactions and interplay of both Neruda and Peluchonneau with what is a fantastic supporting cast.

I must mention the main actors too because Luis Gnecco and Mercedes Morán are entirely convincing as Pablo Neruda and his long suffering wife Delia. They have a wonderful on-screen chemistry which just intensifies the emotional aspect of the film. Gnecco has also managed to encapsulate the “untouchability” of Neruda with both poetic ego and political pomposity, it’s a stunning performance. Although, for me (and thankfully) the main acting plaudits have to go to Gael García Bernal. Put it like this, if this was a mega-budget Hollywood film, the role of Peluchonneau would have the mark of Johnny Depp all over it, and Bernal pulls off a performance of similar stature with unique flair. From the deliciously existential and noirish voice-over that tells the whole story from the Inspector’s own viewpoint, to the physical and mental attitude of little-big-man authority, to even the deportment of his pencil-thin moustache, I bought into the character hook, line and sinker.

So this may not be the film the marketers want it to be but I get the feeling that it’s exactly the film that director Pablo Larraín was aiming for. As Peluchonneau says, at a deliberately mundane point in his chase of Neruda, “This hunt is lacking in terror” but that’s exactly the point. This film is not about the immediacy of the action nor the consequences of the events, it’s about the people involved.