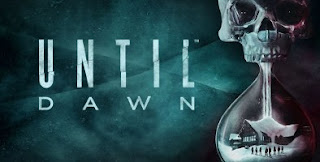 Steve Taylor-Bryant discovers that gaming doesn't just mean Football Manager as he played Until Dawn on the PS4...

So, I am writing a gaming review. This is a new one on me, mainly because this is a modern-ish game on a console, not one of my “Commodore is the best”-type of looks back into history. So how did the non-gamer end up here? Well, I have many children and finding time to spend with them is difficult. They are different ages, have different interests, one of them is even a girl. The girl loves comics so time with her is both easy and a pleasure. No4 boy is not even five years old yet so everything is Batman, this makes Daddy proud. No2 son, the eldest living at home, is a trainee chef, a career I spent twenty years in, so we have that. That leaves No3, the gamer. Now, I don’t play games, with the exception of Football Manager. My time is short and many games take a time commitment, I have insanely small thumbs for a man of my age which makes rapid movements on one of those handcontrol dubrywhatsits almost impossible, and I really don’t ‘get’ the appeal of gaming. But I love my kids so I purchased a game of No3’s choice, booked a day off work and sat for seven hours to play Until Dawn.

What an intense yet wonderful use of my time.

Until Dawn is a sort of supernatural horror film but you get to make decisions throughout by playing as various characters and so the game play is dependent on the consequences of your decision making. It’s like a ‘Choose Your Own Adventure’ for the Cabin in the Woods and Saw generation. The graphics were stunning and, after hour one, I genuinely forgot that this was a game. The casting, including one of my favourite actors in Rami Malek, along with the motion capture way of filming really adds an intriguing element that sucks you into the reality you are dealing with - Until Dawn is that immersive. The gaming parts are not complicated, hit some buttons in various orders to climb stuff, use the toggle joystick thingy to move around and, for a non-gamer, it’s a perfect introduction into non-football related shenanigans. The hours from night until the dawn comes are broken up with psychiatric evaluations by Prison Break’s creepy Peter Stormare and some of the choices you also make in these meetings have a bearing on how the next few hours may play out. You can collect evidence and work out exactly what has happened on the mountain over the years, or look into some totems to get glimpses of the future, but primarily Until Dawn is a morality game. Do you protect a friend, both mentally and physically, or do you perhaps upset them, or even shoot them in the face (I did this to Emily, felt good to be honest). The choices you make determine the game’s outcome and the choices you are given to make are brilliantly thought out. Add in the extraordinary cast, great graphics and a relatively exciting horror narrative and you have a stunningly brilliant game.

What a great way to spend seven hours. No 3 and I took it in turns to play those hours, it’s only a one player game, but with both of us being different people seeing how my decision making affected his gameplay and vice versa was a genuine joy. WARNING – I've noticed he gets really moody if you try and get everyone killed in the last hour.