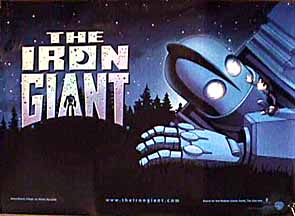 Our small band of Gunters here in The DreamCage universe are reviewing every film mentioned in Ernest Cline's Ready Player One. This week Susan Omand has a revelation watching The Iron Giant...

“You are who you choose to be.”

I am a huge fan of animation. That statement used to read “I’m a huge fan of animation as long as it’s not big-budget American” because, for me, US animation done by studios like Disney or Warner Bros always sugar coats stories, over-simplifies and over-sentimentalises and generally coddles the viewer. The Iron Giant is the film that has changed my opinion and I only regret that I have waited this long to watch it for the first time.

This. This is how animation should be done. The drawing was amazing, incredibly well researched, and the colouring was utterly gorgeous. The atmosphere of the backdrops and the level of detail in the characters and props were such that I could have believed it was Japanese made and that is high praise from me. The story too, very loosely based on the book by British poet Ted Hughes - where I hope they got the Hughes surname for in the film, pulls no punches. Yes it’s a well worn path of “boy meets robot, boy and robot become friends, US Army creates havoc through ignorance and deliberate misdirection” but it does it with subtlety and symbolism, with a multilayered story, with careful balance of fact and moral and no cliché, no real “good guy” or “bad guy”.

Before I watched the film too I was very sceptical about the casting but I ended up being very pleasantly surprised at how well they worked with the animation, giving extra depth to the characters. Jennifer Aniston was, of course, a star name on TV but hadn’t done anything too memorable film-wise at the time and made the switch from ditzy gal pal to a mom-style role incredibly well. I think it helped that her character didn’t look like her though, otherwise it would have made it less believable, for me at any rate. The converse is true for the animated character of Dean, voiced by the class act that is Harry Connick Jr, where the look and mannerisms of the beatnik scrap artist really couldn’t have been anyone else and that added so much for me, because I know and love his work as a musician as well as an actor. And then there were the real left-field castings of Frasier’s Dad as the general (one of those “I recognise the voice but had to look it up to be sure” moments) and Vin Diesel as the Giant himself. Yes really! Only 50-odd words, if you don’t count the grunts, but he made them matter – he gave that giant a soul.

The main thing that struck me about The Iron Giant though was the historical accuracy and level of detail, even in the pop culture incidentals. The comics that Hogarth reads, from MAD to Superman, the TV shows, the vehicles, even the diner adverts were all very much of their time. With the film set in small town America in 1957, it also has the nuclear-paranoia level pitched perfectly, from showing the cartoon at the start for how to sit under the table to survive the nuclear holocaust (because we all know that works) to referring to the submarine at the end (no spoilers) as The Nautilus, which really was the name of the first nuclear submarine that the US launched in, yes you guessed it, February 1957.

So, yes, this film has changed my opinion on US animation. It made me laugh out loud (the scene at the lake) it made me cry (if you’ve seen the film, you know the bit) it made me angry at how little we have progressed in our tolerance and understanding of others and hopeful in our tolerance and understanding of ourselves. If you have never watched The Iron Giant because you think it’s just another big-budget US made schmaltzy cartoon for kids, I urge you to try it. It is, quite simply, beautiful.