Book - Galahad and the Far-Off Horizon. 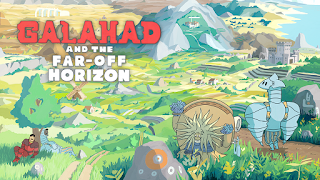 In days of old when knights were bold, they didn't have to deal with enchanted armour! Galahad and the Far-Off Horizon is currently crowdfunding...

Not just for kids, Galahad and the Far-Off Horizon is a 130 page collection of five stories, set in the same fantastical world of witches, golems and magical creatures.  Think Medieval Adventure Time (well, that's what it reminded me of - Ed) and you have the general idea of how the stories play out as each tale, written by Hansel Moreno, is richly illustrated by different up and coming artists to form a colour comic anthology.

The Garden of Galahad is the first story in the book and tells the story of how Galahad, the enchanted suit of armour, gets brought to life by retired knight-turned-farmer, Lance, who needed some help with his crops. Galahad carries out the wishes of its master, helping with the year's harvest and becoming popular around the village until tragedy strikes before a witch called Brynne interrupts its peaceful routine. Over hills, by seasides and past the ruins of old castles, the pair embark on the journey of a lifetime.

That story introduces the world in which the rest are set: The Witches Laugh introduces a powerful coven. Broken Keep is the origins story for Galahad’s creator, Lance. Likewise, Tougher Than The Hills looks back at the youth of Brynne the hedge witch. When Magic Was Free details the tragic beginning of the series antagonist. The stories explore themes of friendship, responsibility, determination and self-discovery amid the backdrop of a magical world and fantastic creatures.

The interconnected stories are each illustrated in a unique art style by Julian Adkins, Chan Chau, Devin Kraft, Maria Frantz and Julie Godwin. The book also includes extra companion illustrations for each story by multiple artists and it’s fascinating to see the artists’ different interpretations of the same characters.

Talking of characters, let's introduce a few (as pictured in the first story illustrated by Julian Adkins):

This is Lance, the retired knight that now runs a small farm in the village he was born and raised in. 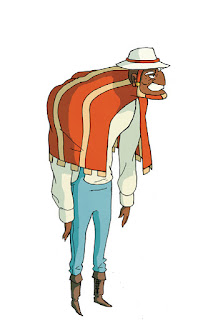 This is Brynne, a travelling hedge witch who roams the land wherever her whim takes her, providing helpful spells to locals. 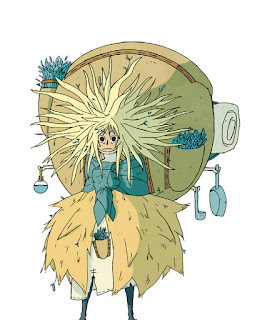 And, finally for now, although there are plenty more characters to get to know in the stories, here is the main man... er... suit... himself, Galahad. 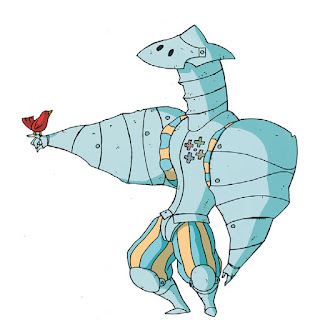 Galahad and the Far-Off Horizon is now live on Kickstarter and is expected to be available in summer 2017 but, thanks to the magic of the interweb, you can have a look at the first ten pages of the story HERE.  Go on, read it, I'll wait...

You're back? Having read the story so far I'm sure you want to catch the rest of it now, eh? The best way is, as always, to back the crowdfunder and pre-order the book in either digital or print format but there are also some other great perks on offer, such as a Making Of digital book, postcards, posters and, if you're very quick because they're selling out fast, there's even some original artwork up for grabs. When you think of how much of a cult following this comic could gather, it would be a worthwhile investment to grab some Galahad goodies now!

Watch the campaign video recorded by the writer Hansel Moreno then back the Kickstarter HERE.