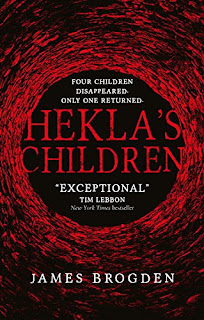 There's a Bronze Age warrior and vanishing children for our resident pisky to deal with as Romeo Kennedy reads Hekla’s Children by James Brogden...

A world unseen. And a force struggling to hold back a terrible evil from wreaking destruction on earth.


No, I'm not describing what happens in the Cornish town of Camborne on a Saturday night. This is Hekla's Children by James Brogden.

A decade ago, teacher Nathan Brookes saw four of his students walk up a hill and vanish.

Only one returned, Olivia, starved, terrified, and with no memory of where she’d been. Questioned by the police but released for lack of evidence, Nathan spent the years trying to forget.

When a body is found in the same ancient woodland where they disappeared, it is first believed to be one of the missing children, but is soon identified as a Bronze Age warrior, nothing more than an archaeological curiosity. Yet Nathan starts to have a horrific visions of the students, alive but trapped. Then Olivia reappears, desperate that the warrior’s body be returned to the earth.

For he is the only thing keeping a terrible evil at bay...

Brodgen's fantasy horror has a lot of elements that work and others that, for me, didn't.

I didn't hate it but at the same time, it felt like certain elements didn't quite gel and at times made it difficult for me to connect with. For example, at the beginning of the story we see the events of the children's disappearance unfold through the eyes of Nathan. Then ten years after we see that Nathan left his job as a teacher and is now working at a youth outdoor activity center in Wales. This is all well and good as, to me, it felt like Nathan was almost trying to right a wrong in some shape or form and, whilst this adds something to his character, for me that felt like it should have ended there as far as telling the story from his perspective goes. Especially when a much more interesting character takes the stage (Dr Tara Doumani) and for a while we see the story unfold through her narrative. This is where I actually started to somewhat enjoy it.

But then the POV would go back to Nathan, who has now returned to where everything happened, over a vague FaceBook post from his former fling who he hasn't spoken to in years. The thing is, the news article wasn't asking for Nathan's help or even for him to return because although him and Susannah lied to the police about what they were doing when the children vanished, he genuinely does not know what happened to them. It seemed a small thing in order for him to return to where it happened and be placed under a microscope for.

Basically, what I'm trying to say is that his connection to the story felt weak and at other times unnecessary.

Yes, the story had good moments to a certain degree but other than the aforementioned character there were times when parts of the story felt rushed or hammered in like a puzzle piece that doesn't quite fit but is made damn sure its going to fit whether it likes it or not. Overall, things like Bark Foot (the warrior who spends eternity keeping the afaugh from leaving Un and entering our world) the character of Dr Tara Doumani and the anthropological connections to the unearthing of a bog mummy, were all things that kept me reading but unfortunately there were many threads that were leading somewhere but ultimately cut short of actually getting there and thus falling short of what could have been an all round enjoyable novel.

Hekla's Children is out now via Titan Books.