Book - Tarzan and The Lost Tribes 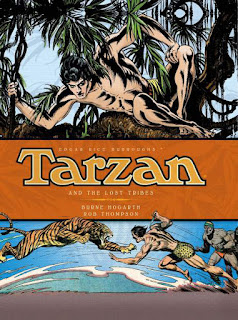 Welcome to the jungle as the comic strip collection Tarzan and The Lost Tribes is published on Monday by Titan Books...

Collecting the unparalleled works of Burne Hogarth on one of the most influential comic strips of all time, Tarzan and The Lost Tribes is the penultimate entry in Tarzan: The Complete Burne Hogarth Comic Strip Library, authorized by the Edgar Rice Burroughs Estate. Bringing together the strips from 1947-1949 and lavishly reproduced in full colour, the series is the most complete collection of Hogarth’s highly sought after Tarzan Sunday strips available.

The character of Tarzan was created by Edgar Rice Burroughs and first appeared in the novel Tarzan of the Apes in All Story Magazine in 1912. Portrayed as a feral child raised in the African jungle by apes, Tarzan eventually returns to civilization to take his rightful place in the House of Lords in the British Parliament, but he continues to return to Africa where he becomes a heroic adventurer. His first onscreen appearance was in the silent movie blockbuster Tarzan of the Apes in 1918. Since then the character has been explored in over fifty authorized films and seven television series.

Burne Hogarth is one of the two most famous artists ever to tackle the newspaper adventures of Tarzan of the Apes. He is one of the most influential illustrators of the twentieth century, thanks to his unmatched Tarzan strips and his books Dynamic Anatomy and Dynamic Figure Drawing.